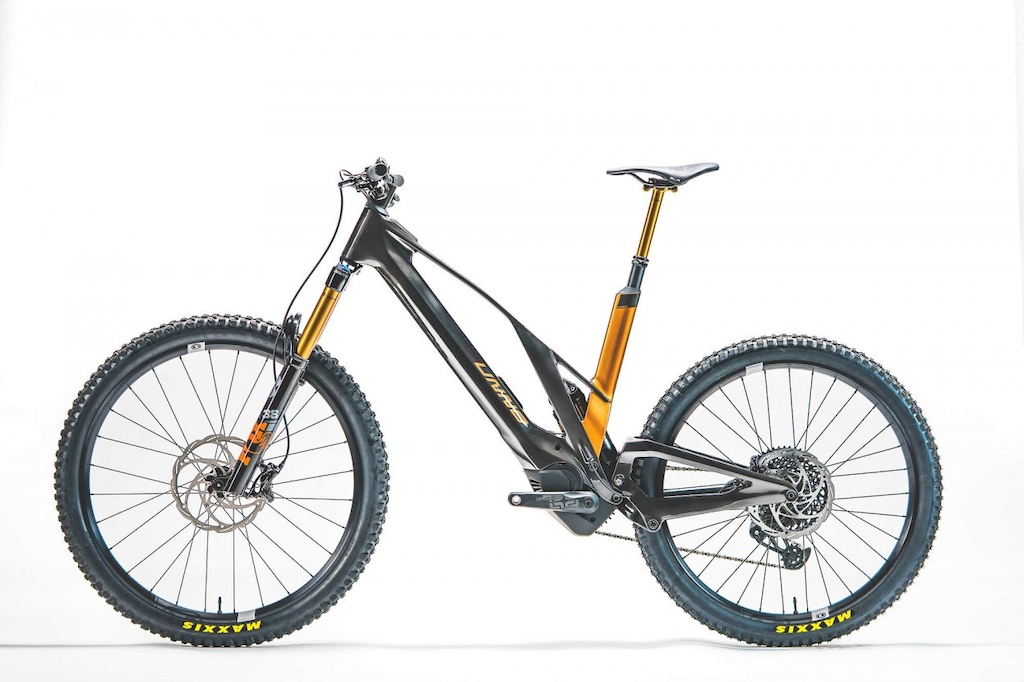 Unno is a brand known for its premium carbon bikes. The company, which is based in Barcelona, is led by ex-world cup racer Cesar Rojo. Rojo, who was once part of Mondraker's design team, also runs Cero Designs, which is a design and consultancy company and has had a hand in many other brands' bikes over the last decade.

They now release their first-ever eMTB, the €9,995 Boös, but the price tag isn't the only thing catching the eye, nor is the geometry and mixed wheels the only thing about the bike that could be considered progressive.

The bike uses a Bosch CX Gen 4 motor and a 750Wh battery.

It's made in partnership with Oceanworks, a company that helps retrieve and recycle rubbers and plastics from the world's oceans. All the resin parts of the frame are made with recycled nylon. Each BOÖS contains 184g of Oceanworks nylon and 80% of this comes from the ocean, mainly from the nearshores of Asia. Unno uses PA+GF15% for all recycled plastics.

The bike is a mixed-wheel affair and is built around a 170mm fork. This is combined with 160mm of rear-wheel travel. The frame uses a virtual pivot design and is as compact as it is sleek. The shock is almost encased inside the frame and looks to run to reasonably tight tolerance at the bridge of the stays. The frame uses Enduromax double row bearings to increase stiffness and should help increase intervals between maintenance. 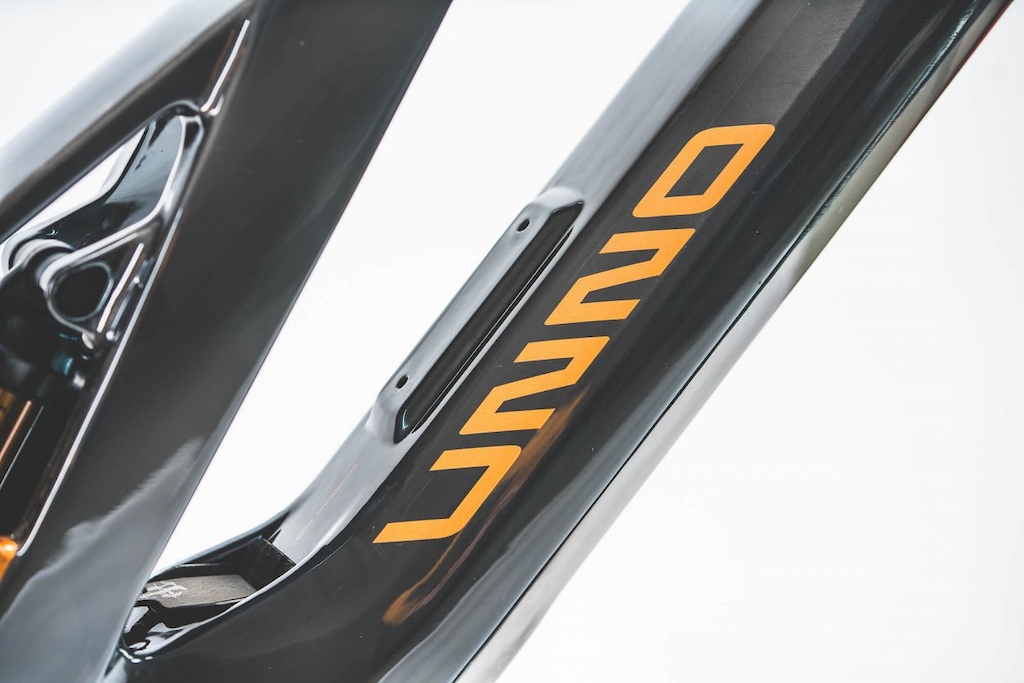 A small raised section allows a bottle cage to be fitted, whilst also keeping the rest of the frame almost shrinkwrapped in appearance.
Unno recommends using around 35% sag and says the useable range runs from around 30 - 40%. For 160mm of travel that seems quite deep, and although the only graph available is relatively basic, it looks as if the rate falls from around 3.7- to 2-to-1 in a relatively consistent fashion, without any bumps or rises. This would indeed make it very progressive. 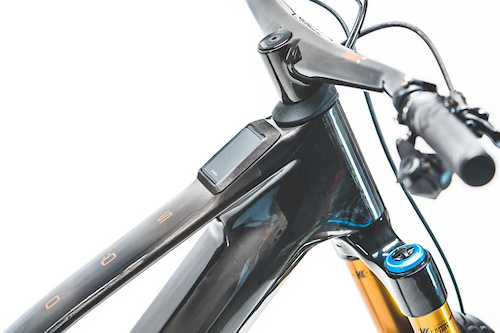 The integrated Box Kiox and internally housed cables make a good job of an e-bike that doesn't look like a lawnmower. 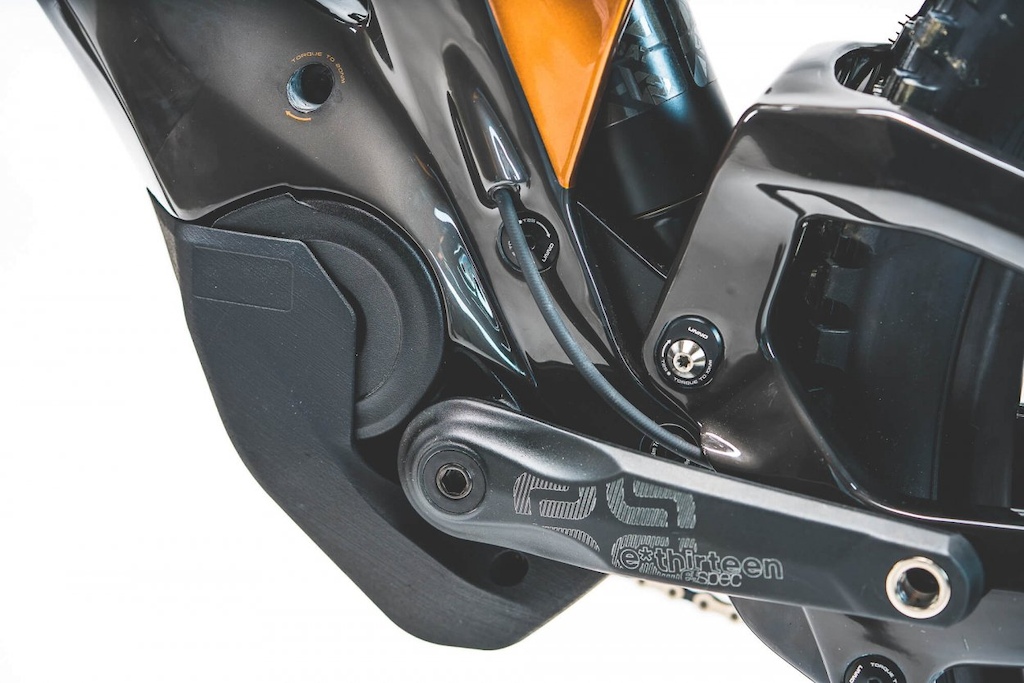 The motor cover looks to be moto-inspired.
Many parts of this bike would suggest that integration was high on the list of priorities. There are little things such as the small chain guide affixed to the frame, or the motor cover that doubles up as a bash guard. There are also bigger elements like the near-flush Bosch Kiox screen or the cables running through the Deux headset. The bars and stem, also from Deux, are one-piece, plus thre's a hidden clamp in the mast-like seatpost.

The motor cover is interesting in itself as it almost looks to try and protect the relatively low-slung rear triangle. It's as if if you're going to hang up on something Unno would rather the cover take the brunt. The location of the lower bearing on the swingarm isn't that dissimilar from the Norco Range, which also has a lot of protection. 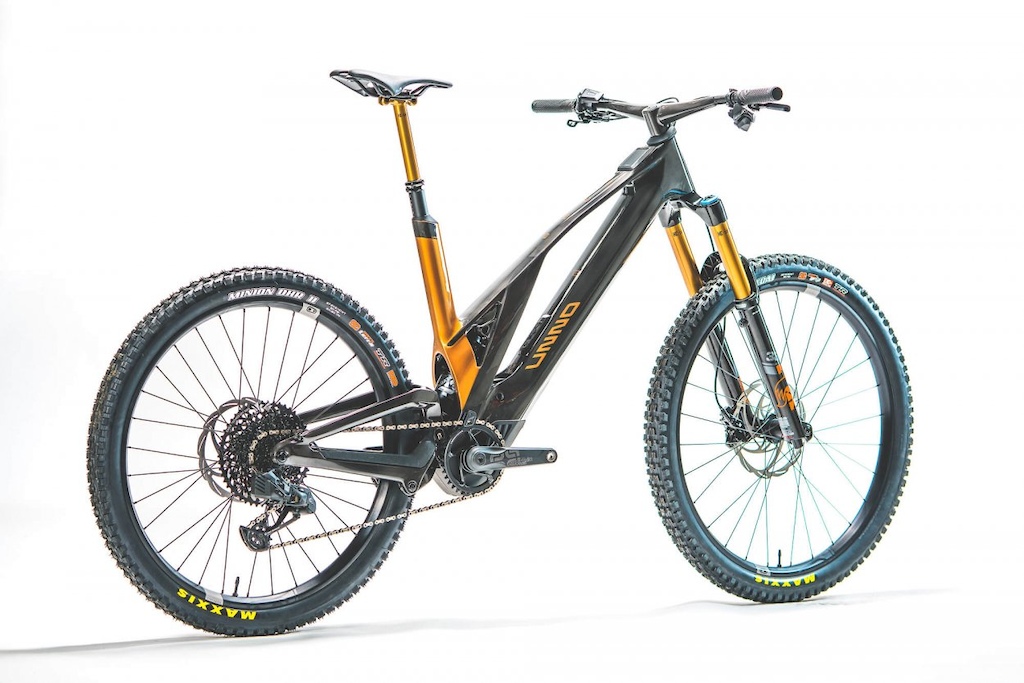 Gone are the days of ugly ebikes. This thing is beautiful.
Geometry

The S2 size, which is currently the only size on sale, uses a reach of 470mm and stays of 450mm. This will give it lots of weight on the front wheel. It also has a relatively high stack of 640mm. This makes it a very interesting proposition as the rider's weight will be largely driving the front through their feet, with the option of adding more weight in their hands. Both the rear center and the stack are a greater value than you might typically see on a bike of this size. The head tube angle is 64 degrees and the seat tube angle is 77 degrees. One outlier is the seat tube. At 460mm for what is effectively a size large, this seems a little on the long side to me.

The S1 and S3, which use reaches of 435 and 510mm respectively, both use the same length rear end. It feels like the 450mm rear center would pair up best with the reach of the S2 or S3.

Unno will release the Boös online and initially in only one build kit - The Race, and only in the S2 size. Unno says that other sizing and build options will be released through 2022 and into 2023. For more information please visit their website.

scott-townes (Apr 18, 2022 at 9:38)
Same, it seems like such a great deal but I'm not sure if it'll hold up to equally as good-looking bikes already on the market like the Momas Jason.

Mtn-Goat-13 (Apr 18, 2022 at 10:04)
Are you having some "hey-we-already-developed-a-seattube-this-steep-on-the-Grim-Donut" jealousy pangs? I am. But I don't have $12,000 to buy an ebike that's not gonna have Russian nickel batteries in about 6-12 mos so...do they have a pedal up version? Just wanna be sure I can ride when battery precious metals aren't availble>

Kidding about that - but honestly (and anyone chime in here) - is there gonna be an expected battery crunch now that we've just learned most of the worlds nickel comes from Russia & that's all grinding to a halt (or will it not?) Totally curious even tho I dont' ride ebikes...

SlodownU (Apr 18, 2022 at 12:25)
@Mtn-Goat-13: Not having enough batteries for something you shouldn't need batteries for. I don't think anyone will shed a tear for the eMTB-bikers of the world.

Poachninja (Apr 18, 2022 at 14:00)
@Mtn-Goat-13: High value add nickel products in batteries will be marginally affected as the nickel is a much smaller proportion of the total cost. Battery makers will be able to buy the minuscule amount of nickel they need at pretty much any price, especially ebike batteries, which are not nickel cadmium. Stainless and nickel alloy makers, ( 80pct of all nickel used) will face some price hikes, perhaps, but Russia is only 11pct of global nickel production (Indonesia is the biggest producer) and the biggest buyer is China, who probably won’t cut Russia off.

1) a state of discordant internal emotional and cognitive confliction induced by the aesthetic and functional perfection of the Unno Boös, as many experienced mountain bikers have previously shunned eMTB’s because they’re almost always freakin ugly.

2) a heightened and compounded state of anxiety induced by the unrelenting desire to purchase the Unno Boös, while knowing and expecting the resultant strife when trying to explain the credit card bill, especially when the dollar is at its best USD-per-Euro exchange rate since 2003.

Mtn-Goat-13 (Apr 20, 2022 at 21:04)
@SlodownU: Hear ya & I don't have an ebike, don't plan on one anytime soon but the questions outta curiosity so I asked. Not an issue of shedding tears, its just information and I like to be informed. Emotion isn't the issue.

hardtailpunter (Apr 19, 2022 at 2:12)
perfect summary of my sentiment towards this bike. Does seem like a great way to scream "I'm rich!" at your fellow mountain bikers though...

gnarlysipes (Apr 19, 2022 at 21:06)
@hardtailpunter: Unno bikes must be an acquired taste. And I have no desire to acquire that kind of taste.

proDHracer (Apr 18, 2022 at 22:39)
@commental: That actually looks like it has a way smoother entry angle than any other headtube cabling options than ive seen. You can see that on the ebike review ebike-mtb.com/en/unno-booes-race-2022-exclusive-review

commental (Apr 19, 2022 at 0:43)
@proDHracer: If you are happy to buy any bike where you are forced to run proprietary components over a traditional set up good for you. Personally I'd never buy a bike with cables run in this way. It's purely for looks, with no benefits.

garrettstories (Apr 18, 2022 at 9:07)
Bonus points to the first bike manufacturer that manages to find a color match to the 50 shades of Kashima.

stephenzkie (Apr 25, 2022 at 4:03)
It drives me insane that my fork and shock stanchions are of different shades

I see you're still getting flashbacks from those shrooms. Don't worry, they'll stop eventually

corporaltedbronson (Apr 18, 2022 at 9:17)
I dunno, it looks all out of proportion to me. Like someone with a big belly and skinny legs.

Mtn-Goat-13 (Apr 18, 2022 at 10:08) (Below Threshold)
Don't forget about the New Legions of Tweens & Teens... all the rage in bike parks now. Kids who otherwise would never pedal up and can't w/o a battery - and I say that w/ zero malice for ebikes, just spoiled bratt-itudes.

- have headset internal cable routing
-it burns when you pee

metroneck (Apr 18, 2022 at 9:40)
Always happy to see innovation, but for the love of God, dumping dirt from the back tire on to shocks and pivots is a huge design fail.

seems like some bad demographic research was done here...

At least this 022J company knows their market.

Vegasbmx (Apr 18, 2022 at 11:34)
“Gone are the days of ugly ebikes. This thing is beautiful”.Still trying to figure this out. It may be so ugly it looks good; or so good looking it’s ugly. Nothing a few beers can’t fix.

styriabeef (Apr 18, 2022 at 9:35)
For a conventional eBike by means of power and range, this thing is light and good looking. Compared to Specialized and Forestal even the price tag doesn't upset me.

Gavalar66 (Apr 18, 2022 at 10:47)
I bought into UNNO, I own a Dash, I personally think this is a stunner and the first exclusive test ride in WWW.EBIKE-MTB.COM heaps huge amounts of positives for how it rides, I'll keep my powder dry for the other 2 variations they're launching later in the year.

speedfreek (Apr 18, 2022 at 21:58)
@henryquinney - can you please confirm that price? With those specs, from that brand, sub €10k seems suspiciously cheap (yes,
I know, 10k for anything isn’t cheap - but compared to what more mainstream brands are putting out, this really is)

Bikesbecauserunningsucks (Apr 18, 2022 at 9:42)
Only those who have had too much boos to drink would boo-hoo such a masterpiece.

nematon785 (Apr 19, 2022 at 10:16)
Should have called it the Unno Donkey. Because of the huge... Seatpost? Feet off pedals landing on friday fails gonna require an age restriction to watch

Correct me if I'm wrong, but:

why mention it at all with an energy wasting bicycle....

HagarTheHorrible (Apr 18, 2022 at 13:56)
Does it come with a free pair of those Kanye West crocs? Looks like something he would pedal on a street.

rarerider (Apr 19, 2022 at 8:12)
It's not, calling something an affair is just a common british colloquialism.

poundsand (Apr 19, 2022 at 10:47)
So many brands on the market I can't keep up anymore. Are people just slapping names on pre-designed frames from Asian bike shows?

jaymztrigga (Apr 18, 2022 at 13:50)
Id think these guys have the nicest looking E-bike. forestal.com/en/products/siryon