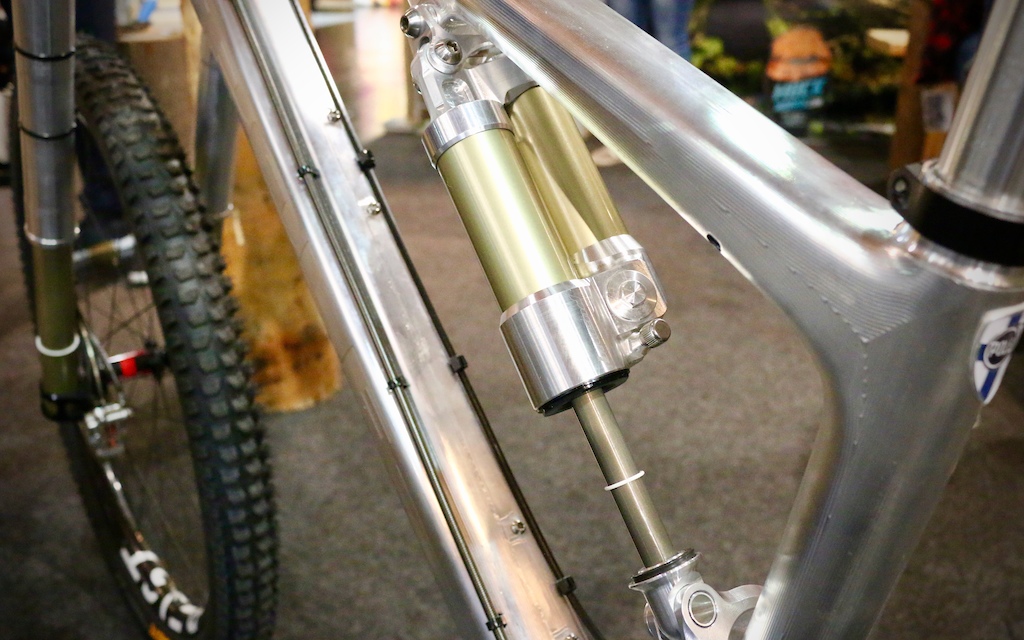 You've probably heard this before, but this air-sprung shock is designed to mimic the action of a coil shock. I know, that's what they all say, but Cornelius Kapfinger of Intend Suspension is doing things very differently than the big boys, and the result is the Hover shock that he says is impressively sensitive, has good heat management, and a more linear-like rate of a coil.

Before we get to what's inside, let's go over the numbers. Kapfinger told me that a 210mm Hover shock weighs 410-grams, and that he's able to configure any eye-to-eye length that customers might need, as well as custom-tuned damping if the bike or rider calls for it. Price? It's a lot; Intend manufactures their products in relatively small batches, and everything is done in Germany... €1,000 for the production version that will be available in a few months time. 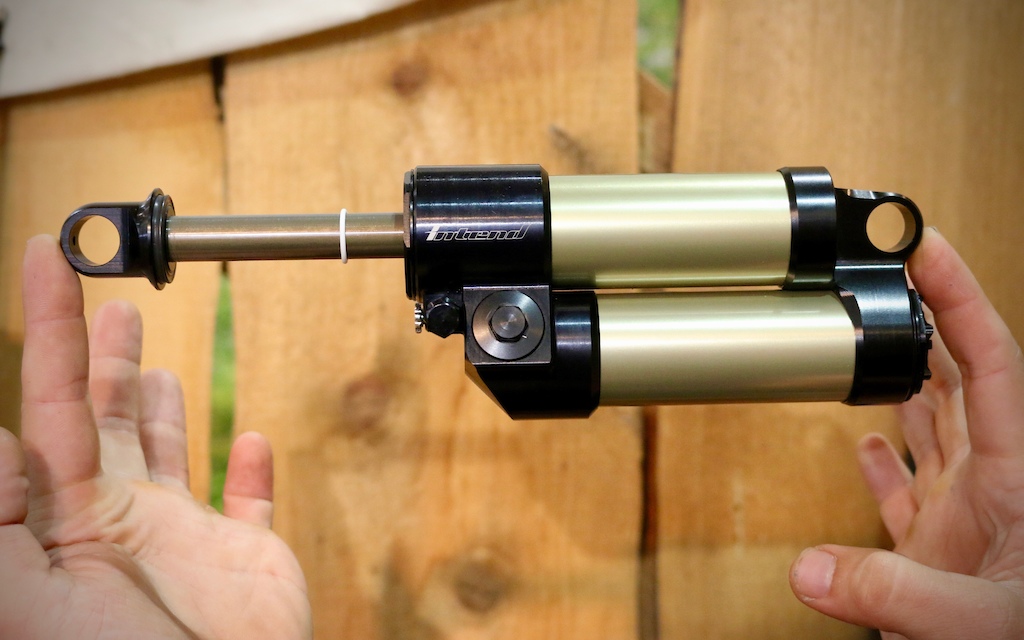 The air-sprung Hover shock costs 1,000 EUR and is like nothing else on the market. It can be built to suit trail, enduro, or downhill use.

External adjustments include low-speed compression, low-speed rebound, and there might be a future version that has some sort of pedal-assist lever. Kapfinger is all about sensitive, active suspension, and turning it off isn't really the priority with his small-scale production, high-end shock that isn't intended to be used by anyone and everyone.

Pushing on the Hover shock that was bolted to a Pole Stamina revealed that yes, it is incredibly sensitive and feels essentially like a coil, with the first few millimeters of stroke being impossibly smooth. Kapfinger accomplishes this with a very large negative spring chamber that's set to a slightly higher pressure than the positive chamber. But instead of a common bleed valve that would fill the negative chamber from the positive, there's a port connecting the two that's opened and closed by a small silver dial. If you want, you could use it to tune how sensitive you want the shock to be. 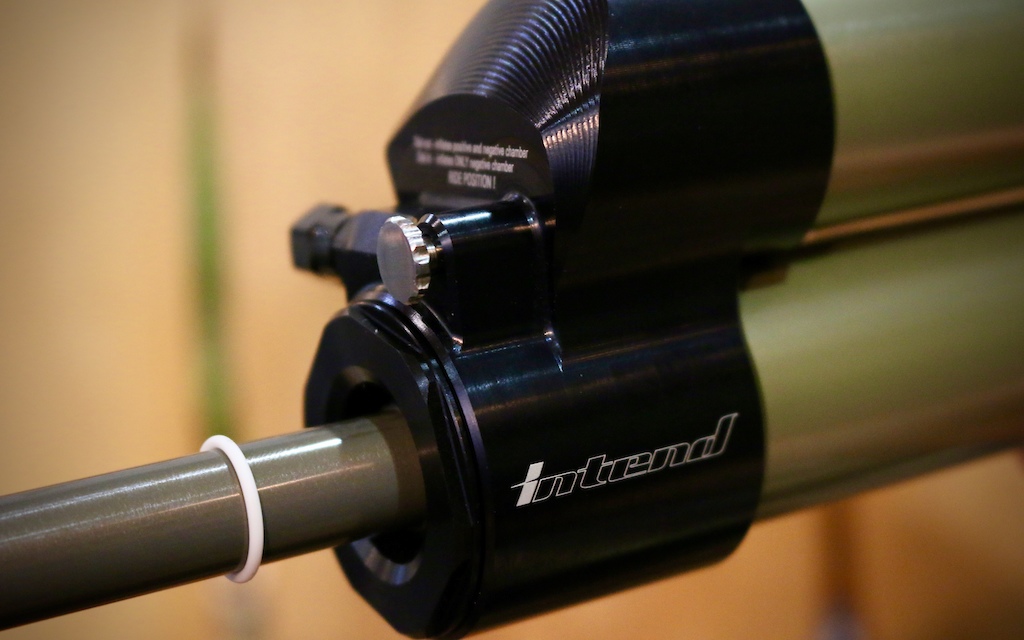 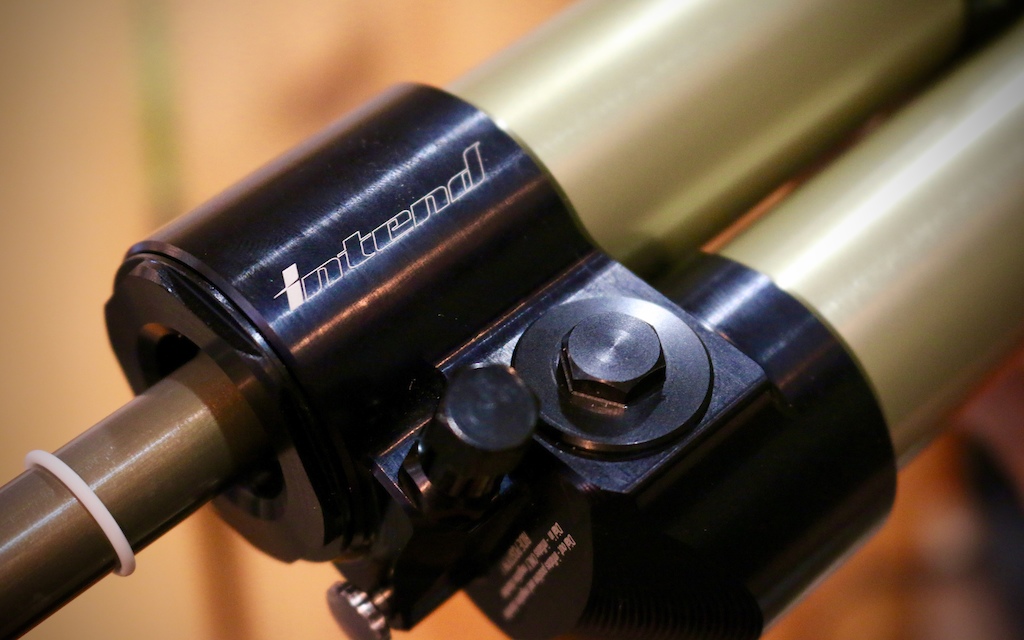 The small silver dial (left) is the valve that joins the positive and negative air chambers. See that thread-in cap (right) that looks a bit like a tophat? If you remove it, you can install O-rings that act as volume-reducing tokens to provide more ramp-up.

Next, he wanted a relatively linear spring rate, not something usually associated with air-sprung shocks. The answer is air volume, and a lot of it, but he's also included a clever way to tune the amount of ramp-up. A cap on the side of the shock can be removed to let you add up to seven small O-rings that reduce the chamber's volume to provide more bottom-out resistance. Being an air-sprung shock, it's going to ramp-up eventually, but Kapfinger wanted it to be as linear as possible for more tuning possibilities.

The heat management was a more complicated challenge, and he ended up separating the air spring from the damper to tackle it. On a common air-sprung shock, the damper actually sits in the middle of the air spring, with the air can sliding up and over it during assembly. Air springs have a lot going for them, but dealing with heat isn't one of them; temps rise as they get used harder and longer, which raises the air pressure, AKA your spring rate, and damping can be affected as well. 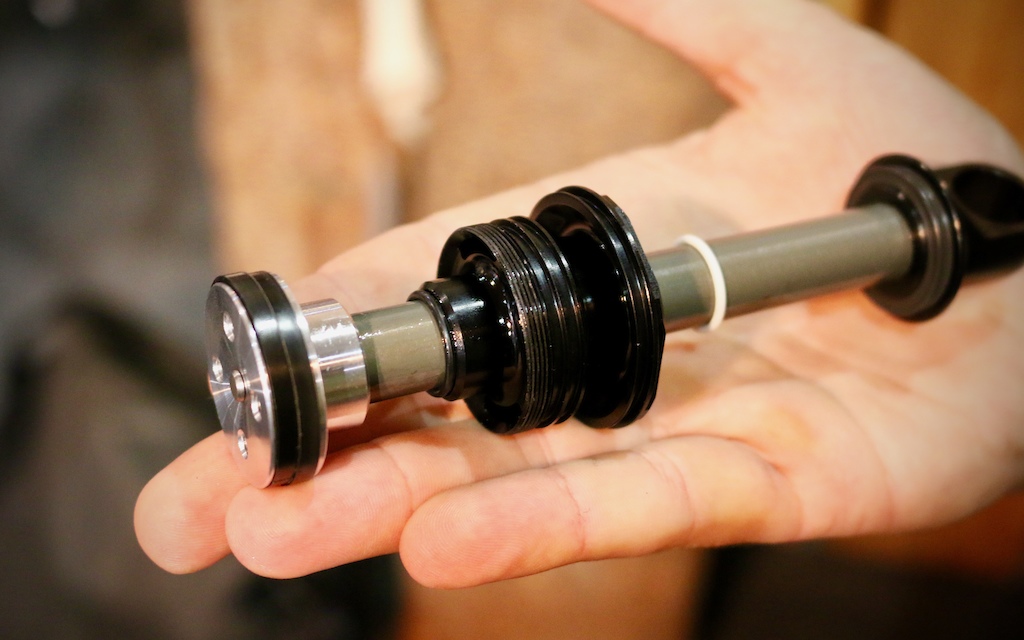 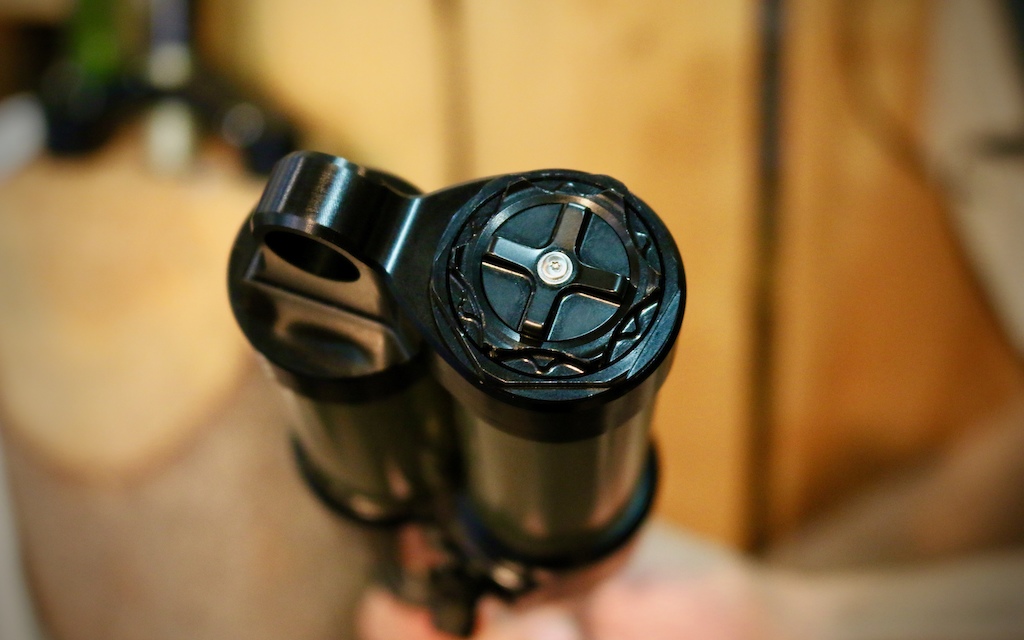 So Kapfinger moved the air spring somewhere else, as you do - it's the second hard-anodized tube that's joined to the damper body at each end. Now, instead of the air spring insulating the damper, the two are entirely separate and, most importantly, the outer wall of the damper can better dissipate heat.

The Hover shock is a few months away from production and, to be honest, I don't have a clue how it performs on a trail, but there's something awesome about Kapfinger doing things his own way, isn't there? 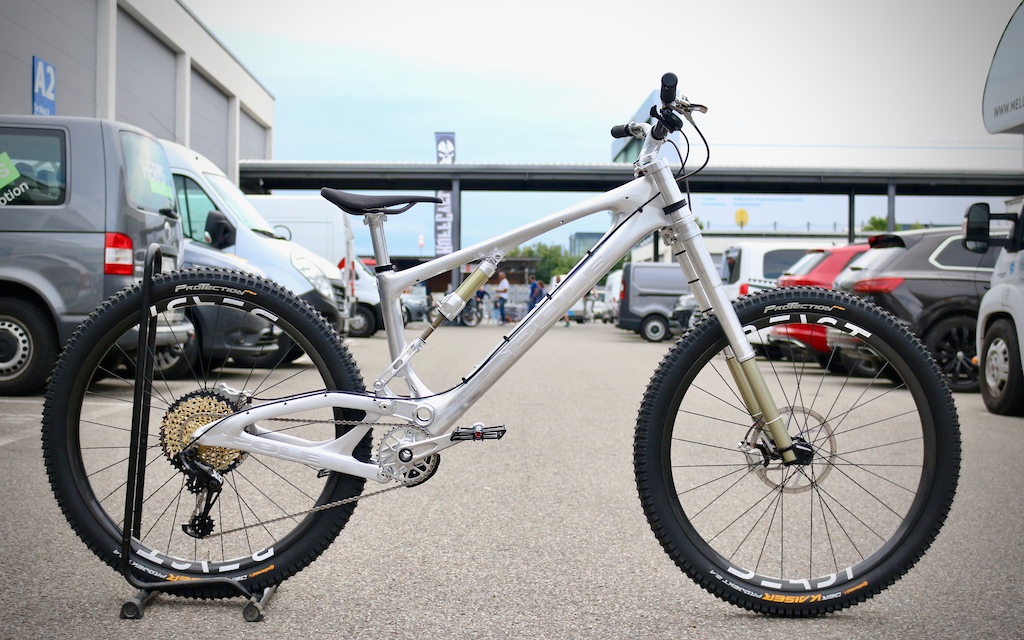 From suspension to stems, but definitely not suspension stems. Intend's range of Grace stems just grew by one with this 25mm rise direct-mount unit, pictured above on a 180mm-travel Pole Stamina, that stands out from the crowd of low-as-possible options out there. Why would you want a high-rise stem, and especially one that's angled forward like the Grace?

Kapfinger says that he sees it being used on downhill bikes with 27.5" wheels where it's not all about getting your handlebar as low as possible. The forward angle is to combat how a high-rise stem of the same length would effectively shorten the bike's reach. 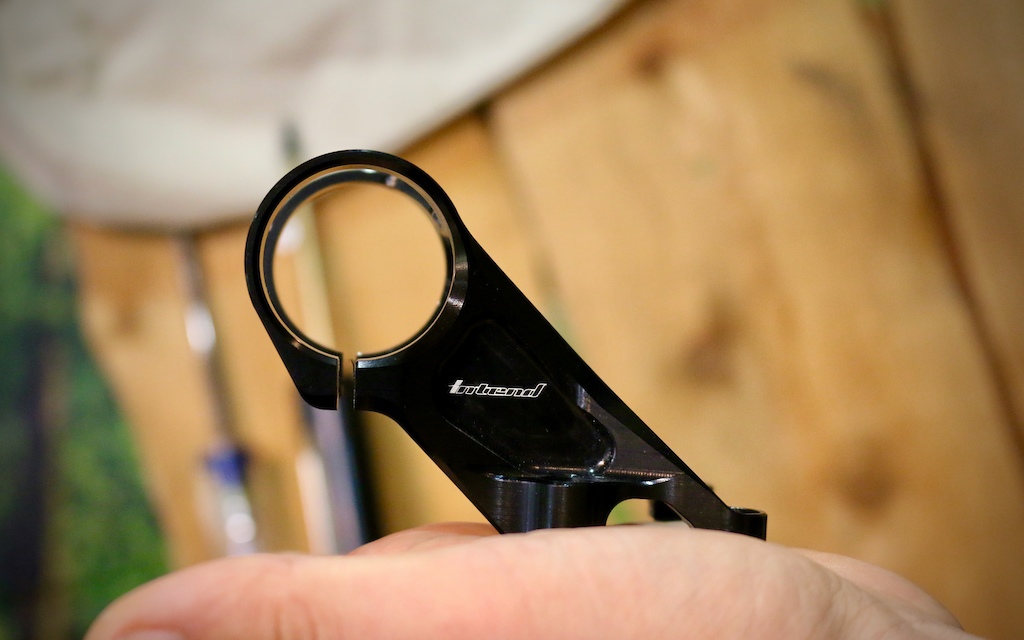 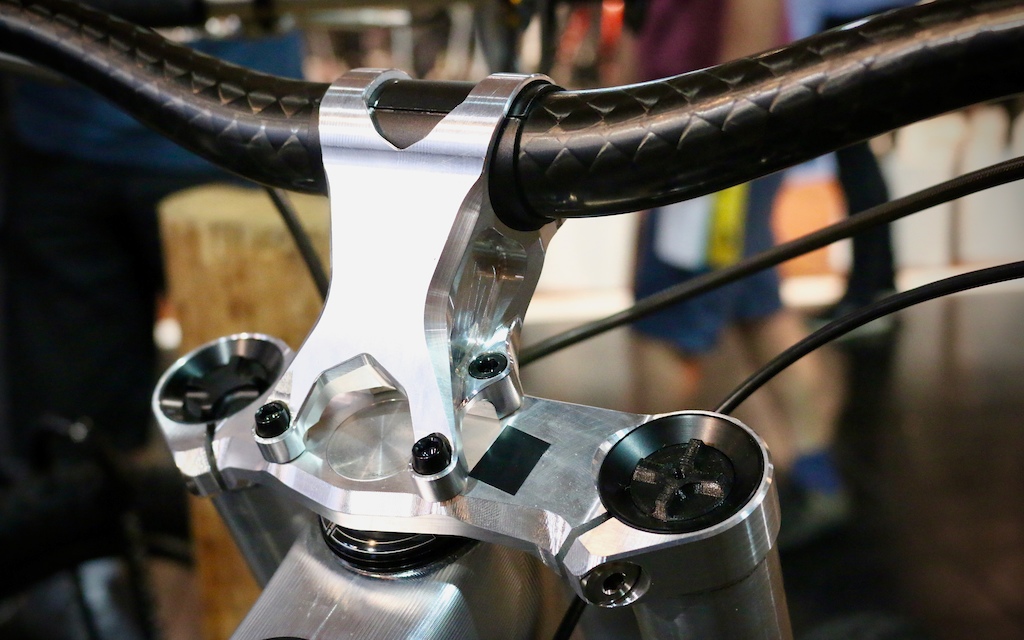 The 25mm-rise direct-mount Grace stem is for those who don't want to go as low as possible.

stumpymidget (Sep 5, 2019 at 11:14)
Cornelius Kapfinger, the most badass name in mountain biking. Also the most stereotypically German/Bond villain.

scary1 (Sep 5, 2019 at 12:44)
Wasnt Cornelius Kapfinger the miner in the stop animation version of Rudolph The Red Nose Reindeer?

Mondbiker (Sep 5, 2019 at 14:00)
@NotNamed: not too far from DHX2 with sls spring either, shows how ridiculous are fox prices in Europe. Not that they aren´t expensive everywhere...

I really dont get why you would buy a DHX2 If there are better+cheaper alternatives out there..

Loki87 (Sep 5, 2019 at 20:49)
@Mondbiker:
My thoughts exactly. Fox pricing has become ridiculous and this Intend shock isn't really expensive at all for what you get.

dave-f (Sep 5, 2019 at 11:25)
While not exactly aesthetic, the stem is hands down a better solution than the direct mount with a big stack of spacers seen elsewhere.

IllestT (Sep 5, 2019 at 12:52)
Massive props to Kapfinger for doing something different and exciting. And props for not just talking about it, but really doing it. I don't necessarily like or agree with all the ideas, but I have huge respect for the guy. The products all have a cool and genuine style

SonofBovril (Sep 5, 2019 at 11:37)
That seat angle on the pole just looks wrong. Maybe I’m stuck on the way bikes used to look and it looks more normal when sagged but it makes me uncomfortable just looking at it

Coldspringer (Sep 5, 2019 at 13:31)
looks like it would end the days of me wishing I could slam my saddle further forward!

gonecoastal (Sep 5, 2019 at 11:33)
I intended to purchase. On the Pole it’s not nearly German enough. Should be a G1 glad with Trickstuff brakes and Tune hubs.

ryan-82 (Sep 5, 2019 at 13:01)
Does anyone know what happened to the Millyard bike and it’s shock? That shock was meant to be incredible but from my knowledge nothing ever came of it sadly.....

saxokev (Sep 5, 2019 at 13:40)
Hey! We are still here and still developing! Trying to sort one last issue then hoping to get the experts riding it! Feel free to check out progress on Instagram or Facebook @ NitroShox
Thanks for asking!

emptybox (Sep 5, 2019 at 13:42)
They are now called nitro shox and their shock will propably be available soon

ORTOGONAL555 (Sep 5, 2019 at 12:43)
The shock doesn't look like ut has a shimmed mid valve, so the damping has to comes from the base valve alone. Interesting design given it's not a twin tube. But what I don't understand is how the air spring work, because the shaft isn't connectdd to the second chamber. Does anybody know?

bkm303 (Sep 5, 2019 at 13:25)
I was scratching my head about that too. Wondering if the air spring is only getting compressed by the added shaft dispacement in the damper.... like if your shock was sprung by the IFP pressure instead of by the air can. Certainly would give you a very linear air spring if that whole second tube is full of air - very low compression ratio.

VorsprungSuspension (Sep 5, 2019 at 17:48)
Solid main piston has air on the back side and oil on the front side, all damping comes from the base valve which would have very high flow rates through it. Internal bottom out bumper though is an odd choice - if that gets chewed up or displaced from its seat at all, that's going to end up jammed in the valving, and it very easily could have been external.

ORTOGONAL555 (Sep 6, 2019 at 1:26)
@VorsprungSuspension: Thanks for the reply. I figured that out watching the video of Levy taking it apart. I don't know if I got it right, but for what I can see the positive and negative chambers are each on one side of the oil column. Can you confirm the positive air spring comes from the oil displacement?

VorsprungSuspension (Sep 6, 2019 at 13:11)
@ORTOGONAL555: that's it - the oil is basically sandwiched between the positive and negative chambers. There's a release valve hidden in the shaft/eyelet to self-bleed the thing of air too, which hasn't been mentioned in this article. Not entirely sure how it'd ensure that only air gets out and not oil though, since oil volume is pretty critical. Also impressive that one guy makes so much complex stuff, that's pretty crazy.

That thing is never going to work.

But seriously, looking forward to it, which is why I commented!

saxokev (Sep 6, 2019 at 4:44)
@y0bailey:
No worries! Just takes ages developing and testing and modifying when we all work full time and have young families and most machining companies don’t want to do prototypes as not worth their time!

BarnaclesTully (Sep 6, 2019 at 7:16)
Yeah, temperatures definitely tend to rise and things get used harder and longer.... I'll show myself out.

jgainey (Sep 5, 2019 at 11:09)
Did you Intend to Grace such a beautiful bike and suspension with something so ugly? Riser bars next time please.