Do you want to ride up really steep things, really, really slowly? The Ascendu could be the trike for you. The Spanish brand claims its bikes can comfortably climb up grades in excess of 50% and you can apparently even set your sights on 70% slopes on a good day.

The bike is able to achieve this thanks to a super-long, super-stable, 3-wheel set up and its gearing, which offers a 1000% range thanks to a Schlumpf Mountain Drive. The Mountain Drive is a planetary gearbox that replaces your front chainring and shrinks every gear by a factor of 2.5, doubling the expansion range of your bike. Combine that with a modern 12-speed cassette and you can end up with a very low gear to help you grind up the steepest of slopes. 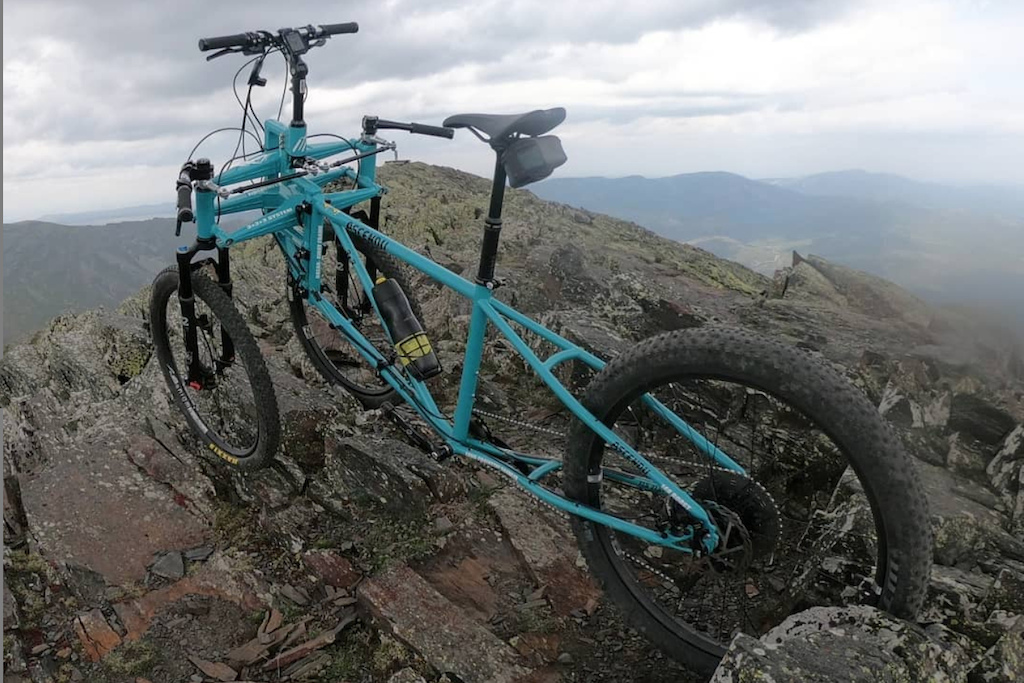 Each front wheel has its own fork and the transverse beams allow them to work better on lumpy terrain. There's also a three-piece handlebar, with each wheel having its own control, allowing you to maintain better balance.

The bike is made in Spain from a lot of Reynolds and Columbus 4130 steel (its 1533mm wheelbase in Large makes it about 250mm longer than the largest Nicolai) and is available to pre-order now. More info, here.


In a Top Gear style race, Dutch BMX racer Justin Kimmann wanted to know which bikes were faster in a straight-out sprint - BMX, MTB or track - so he raced them together over 6 different distances to see which came out on top. The video is in Dutch but there are English subtitles. If you just want to see the races, skip to:

If you thought the Intend Bandit was wild, Crankpusher takes it to its logical conclusion. 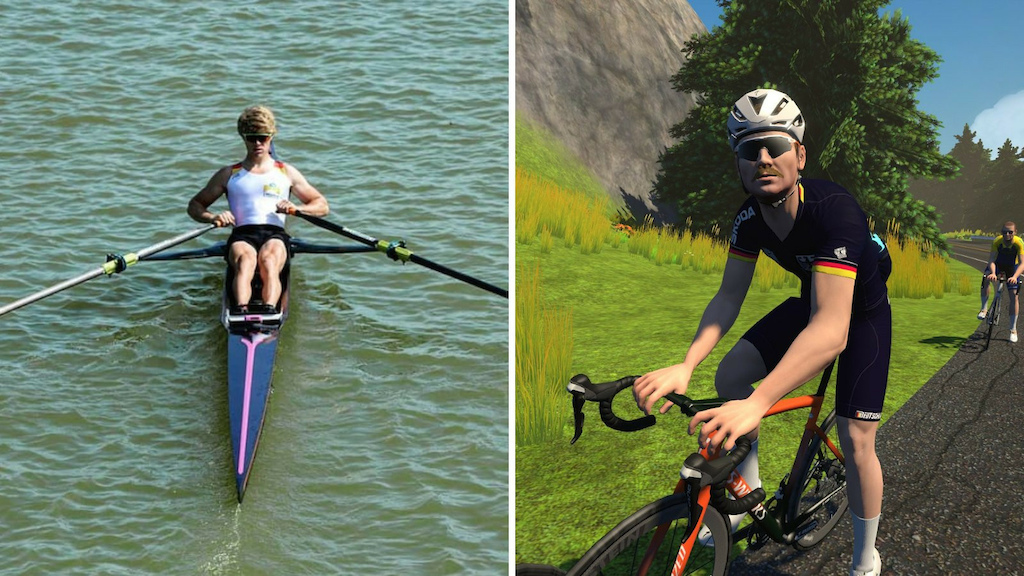 The first-ever UCI sanctioned Zwift World Championships drew cyclists from a variety of disciplines. From XC's Jordan Sarrou to Cyclocross' Tom Pidcock and Road Cycling's Sarah Storey, but it wasn't a road cyclist than won it in the end, but a German Olympic rower - Ben Osborne. Osborne made his attack on the final slope of the race and maintained 10 watts/kg over the last 400 metres with a peak of 12 watts/kg to ride away from the peloton. Osborne took home a real-life rainbow jersey, a digital rainbow jersey to wear while Zwifting, and €8,000. The women's race was won by South African Ashleigh Moolman-Pasio.

Collapse of the Arecibo Observatory

Solving Everest's Mystery in The Ghosts Above

ocnlogan (Dec 11, 2020 at 12:03)
It seems almost like the opposite of shuttling. You can ride the ups, but need someone to drive you back down the hill, as I can't imagine trying to go downhill much faster than walking pace with 3 handlebars to deal with.

acali (Dec 11, 2020 at 13:10)
As I've gotten older I've discovered I can briskly walk faster than I can climb moderate pitches on a mountain bike.

skylerd (Dec 11, 2020 at 13:11)
The point isn't that it makes sense, the point is that it's quirky, playful, creative, and hilarious! It might be short on practicality, but it's got soul. Honestly, pedaling that thing looks like it would be proper, goofy fun.

My wife: "But I do that already"

steezysam (Dec 11, 2020 at 13:24)
I just want to see Chris Akrigg back wheel hopping it around on some rocks, because you know he could

And definitely leave it in that closet where it belongs....

jonbath (Dec 11, 2020 at 12:19)
At least they read all the comments demanding proportional chainstays.

BikeRipperVT (Dec 11, 2020 at 16:49)
@pinkbikeoriginals Don't be outdone by this, dig up a SRAM dual drive, swap out the freehub body for xd, put eagle 52 on it, and then attach that wheel to a bike with a pinion gearbox. And tell us how low the gearing is. Pretty sure it would take a day in first gear to actually make the rear wheel go one revolution. I mean if the Grim Doughnut wasn't enough.... maybe let Waki help design it? lol

Sirios (Dec 12, 2020 at 1:09)
When engineering goes terrible wrong . That's the dumbest bike ever invented . I saw a guy with no legs that climbed a mountain by pulling himself up with his arms . he was moving faster than that absurd contraption .

Jshemuel (Dec 11, 2020 at 13:49)
Would love to set the pressures, compressions, and rebounds of the two Fox forks on that trike way differently just for the lolz

uncajohn (Dec 12, 2020 at 1:36)
This Ascendu bike may offer a solution on the "very low / long ram" without the need for the "slack". Just push the fork forward over a pair of links and make it rotate at the front end of those!

The bike will be as long as we want, without leaning the fork too much or streching the rider too far...

opignonlibre (Dec 12, 2020 at 7:07)
Wouldn't it make more sense and make a more enjoyable climbing bike to mount low gearing on a long wheel base 36er or even develop 36+ or 36 fat tires ? I know that switching from 29x2.3 to 29x3 made a huge difference in my ability to climb rocky and rooty steep sections.

BikesNBites (Dec 12, 2020 at 8:05)
interesting build... I'm sure it could be useful for something, besides mountain biking... really though, beside the over built monster truck look. I see the wheel base as the biggest issue. It's just like me trying to off road with my Caddi Escalade ESV.. sure, it's got a 6.2L engine, all time 4x4 and boat load of horse power BUT, it's a long vehicle not well suited for off road. I'll bottom out too frequently and it's just a big vehicle in general. just like that monstrosity.

alexsin (Dec 11, 2020 at 12:14)
Remember when they used to say that short chainstays help you climb better by tucking the rear wheel under you?

Zapot8 (Dec 12, 2020 at 9:10)
Your scientists were so preoccupied with whether or not they could, they didn’t stop to think if they should.

warmerdamj (Dec 12, 2020 at 11:04)
Could you not just pedal a regular bike up the impossible climb with the same 1000% drivetrain? It would be lighter, and you would look less stupid. Aside from your near zero pace and 150rpm cadence of course.

SJP (Dec 11, 2020 at 13:27)
Take the Bowhead trike from the previous post, remove the battery and motor and add a standard recumbent drivetrain, and it is better than the Ascendu at everything.

iamamodel (Dec 12, 2020 at 0:35)
I rode a Schlumpf Speed Drive on a Spot steel hardtail once. If money was no object, I would have one my trail bike, no question. Fantastic.

trollhunter (Dec 11, 2020 at 12:13)
Ever heard of an Ebike or Dirt bike? Also very cable on climbs that would otherwise be uncomfortable or impossible. Hiking shoes are likely cheaper and just as enjoyable downhill.

fullendurbro (Dec 11, 2020 at 13:39)
Dude I can totally see some dork on the Front Range riding that trike on Green Mountain.

Its not April 1 today?

Jordansemailaddress (Dec 12, 2020 at 10:23)
What a great stocking stuffer! Ordering an Ascendu 3x3 for everyone in the family this year.

Are you telling me that you could ride that?

Websterminator (Dec 13, 2020 at 1:23)
@hllclmbr: Yep! I'll be doing it tomorrow at noon on Cerro Alto Mountain. Pull your balls out of your purse and join us.