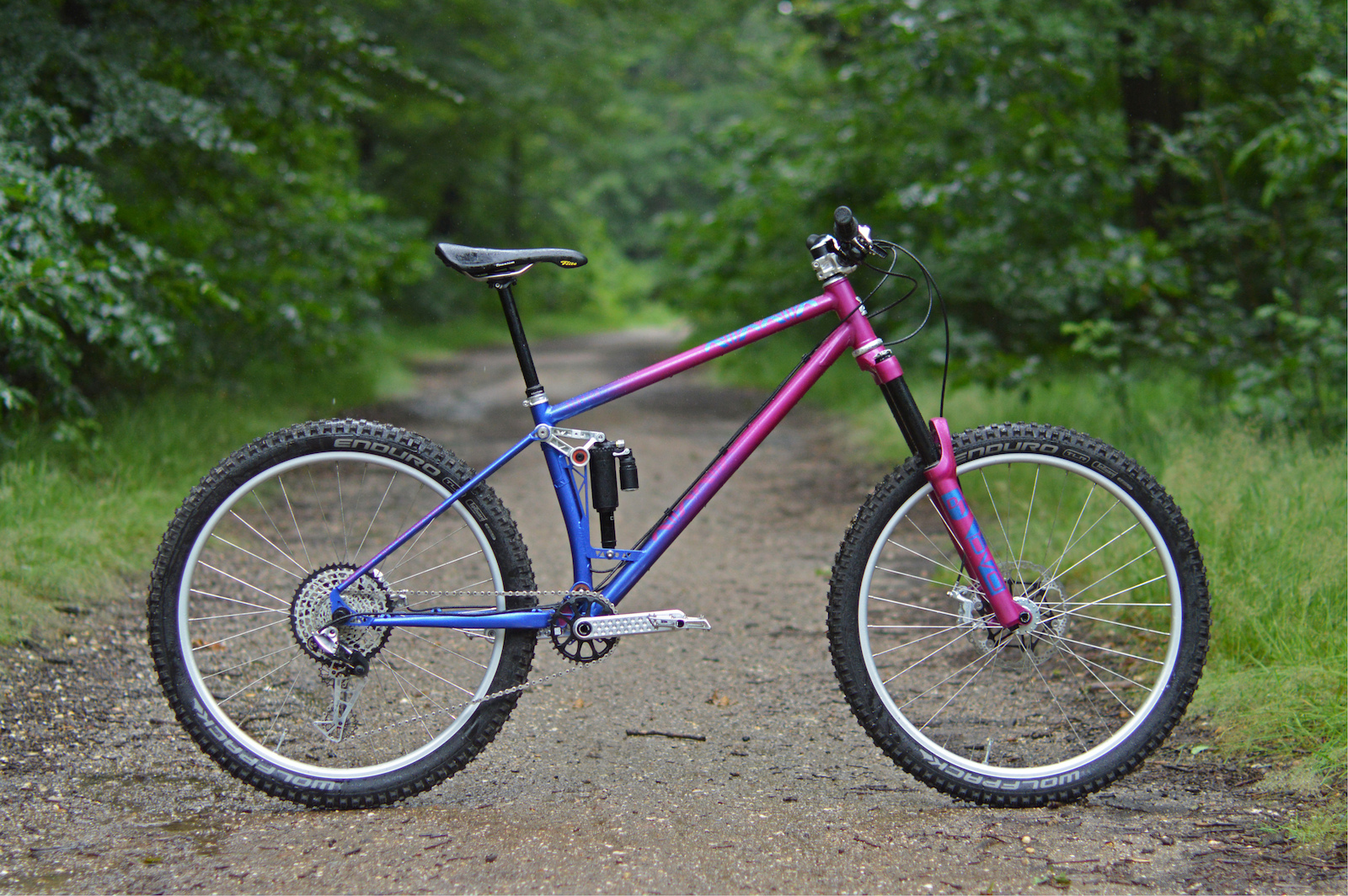 In recent weeks we've seen paint jobs inspired by heavy metal, hornets and even search and rescue planes but there haven't been many as striking as this Project12 Cycleworks Vertigo that was inspired by a Nike Airmax trainer from the '90s.

We've previously covered Project 12 for its Dutch Downcountry Victor but this is the much bigger sibling, the Vertigo. Rather than the 95mm travel the Victor frame had, the Vertigo is 153mm of travel with 27.5" wheels and is designed to tackle the bikeparks outside of its native country. This particular one belongs to a retro bike collector who was attracted to the straight steel tubes with fillet brazed joins from the builder Michiel Burgerhout, but to make it even more retro he added this wild paint job.
Details

Frame Material: Steel
Wheelsize: 27.5"
Rear travel: 153mm
Suspension Design: Single pivot
Head Tube Angle: 64°
Seat Tube Angle: 76.6°
Reach: 470mm
More info: @project12.cycleworks
It apparently took 6 months of sourcing and de-anodizing and polishing parts for the build to come together and then it was finished off with a paint job from Cyclepaint.nl. Even Michiel himself chipped in by swapping out his normal brass headtube badge for a custom machined aluminum one. Let's get into all the details. 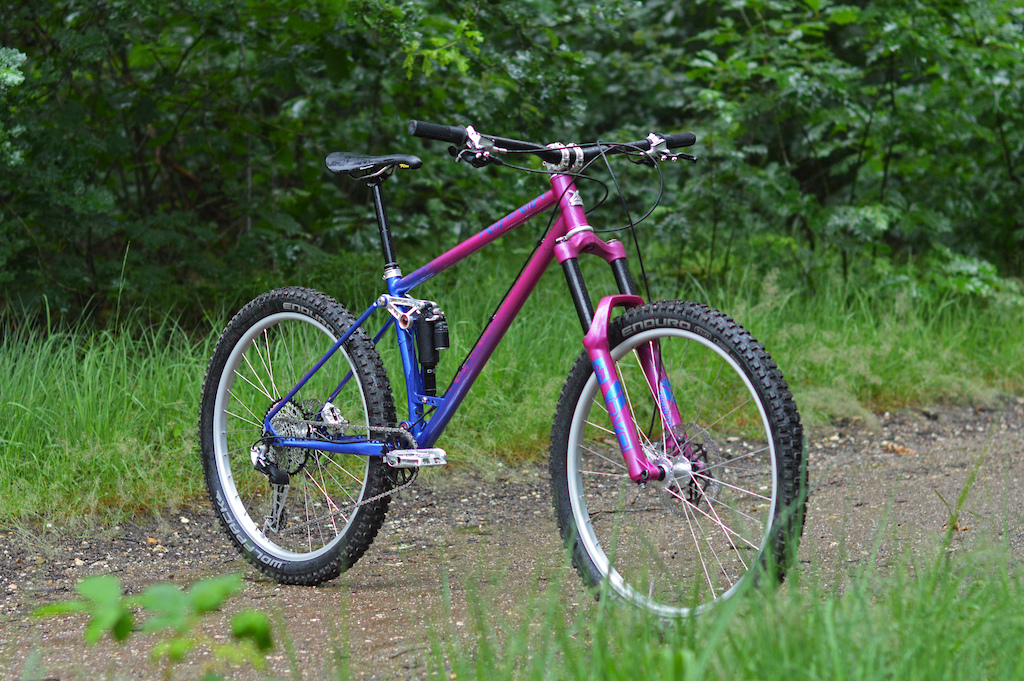 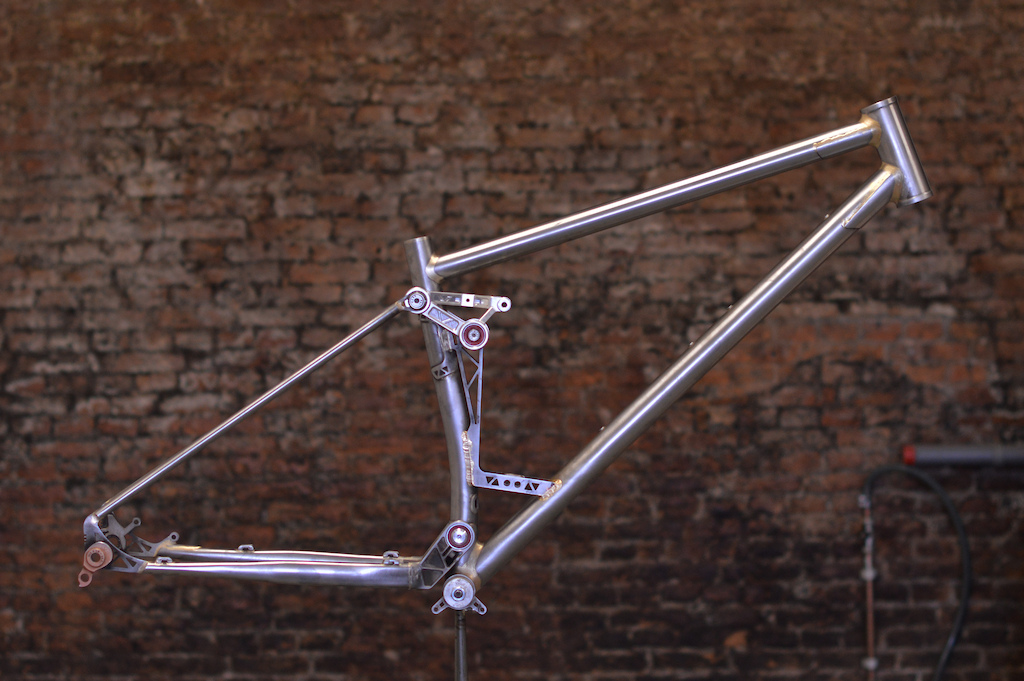 Before the customer got their hands on it, the frame started life as a raw steel version fresh from Michiel's workshop. 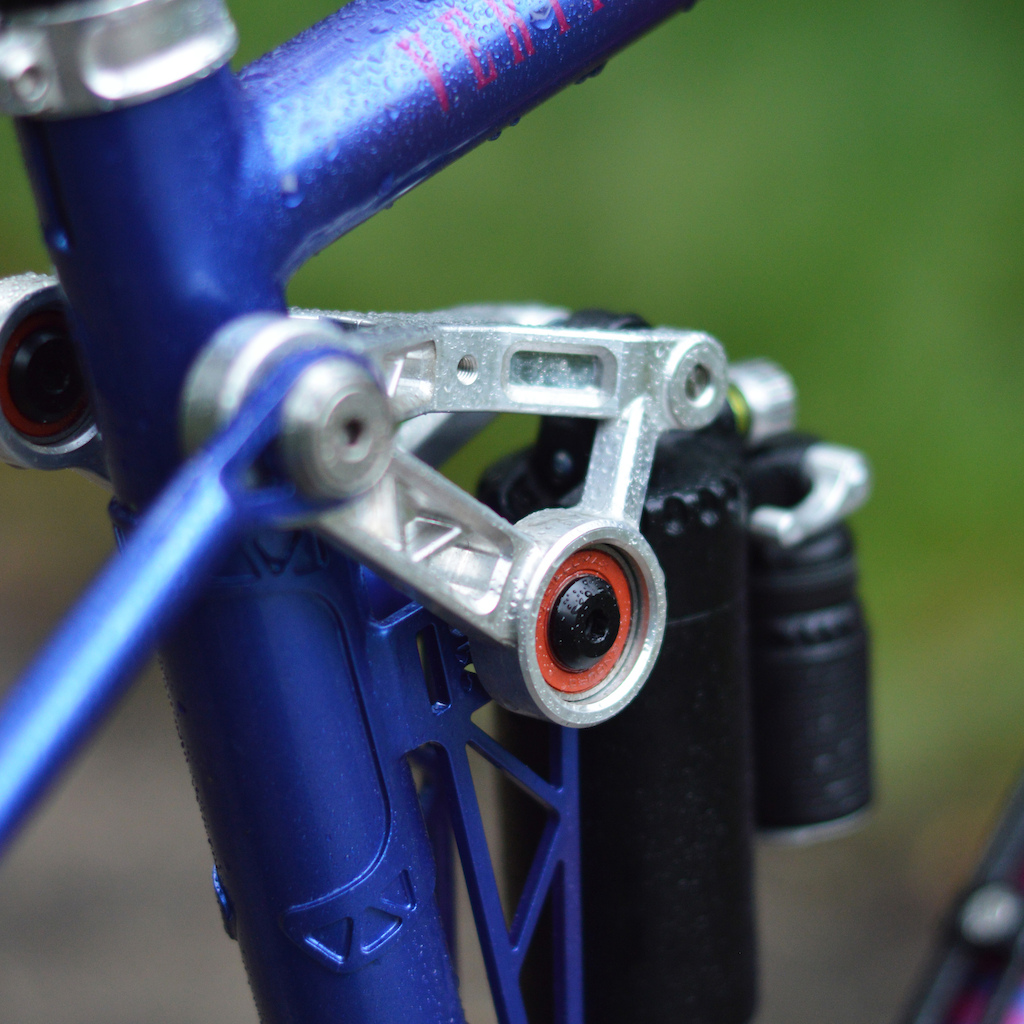 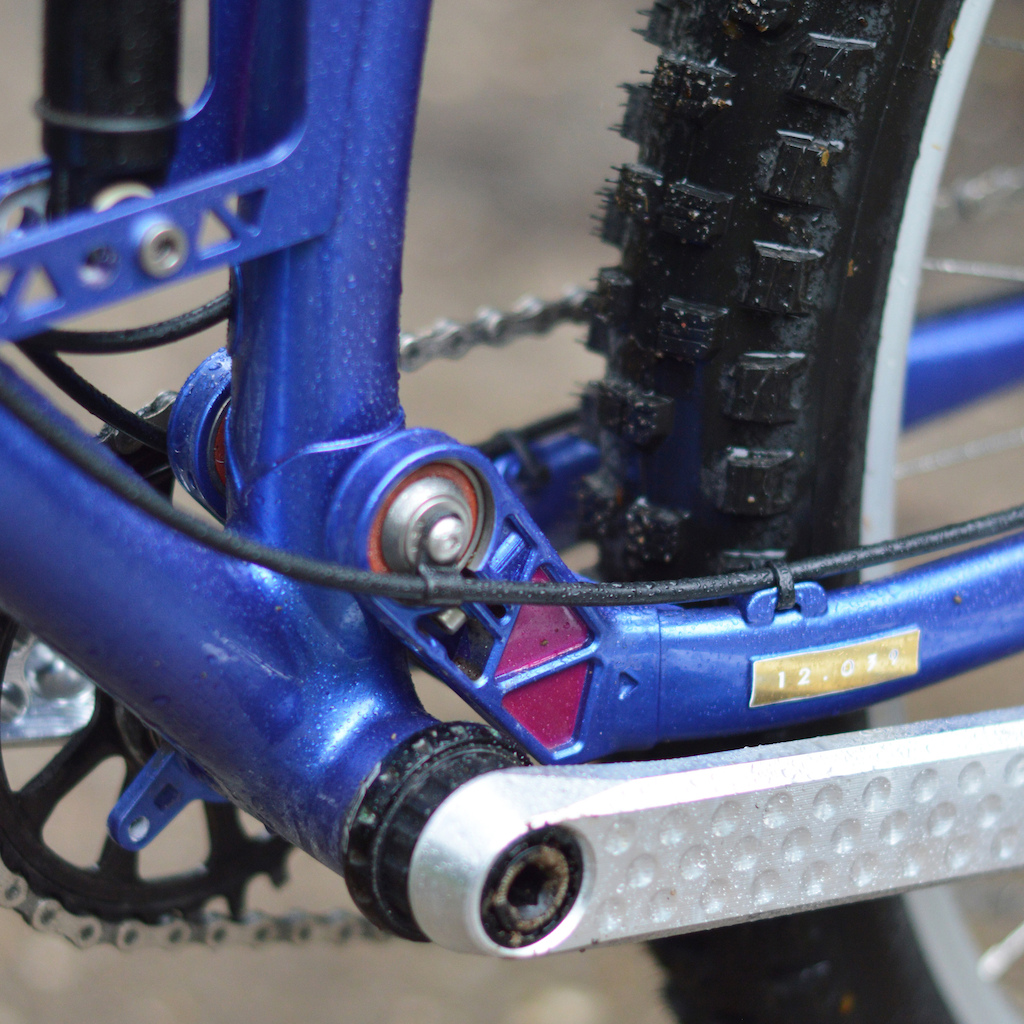 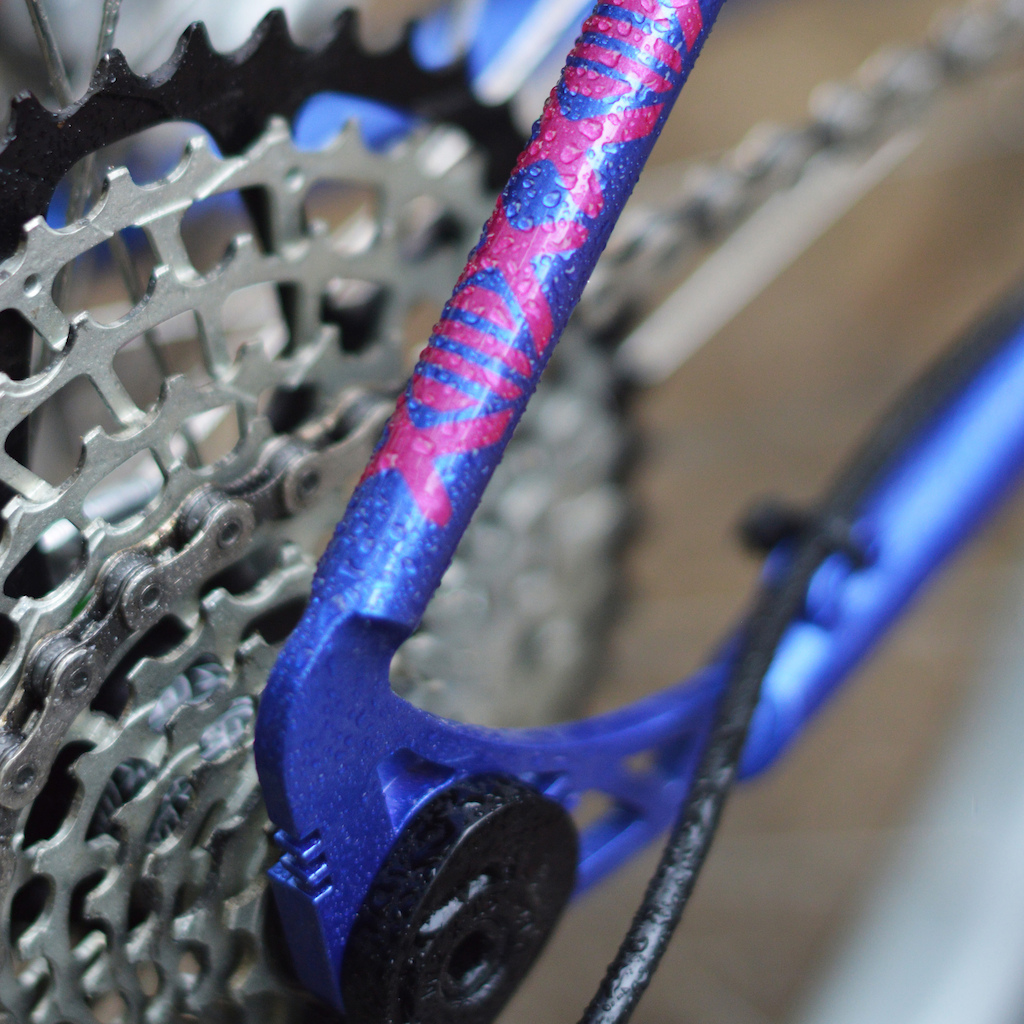 Michiel works loads of cool details into his frames 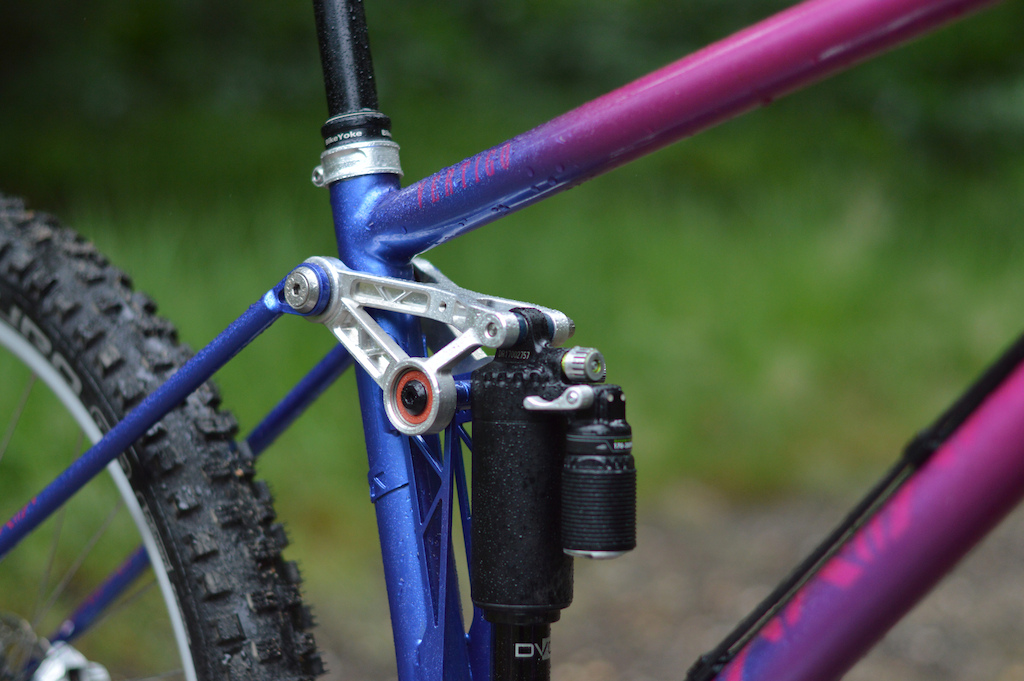 A single pivot design drives the rear suspension. Note the stripped DVO shock as the green anodising would have been too loud even for this build. 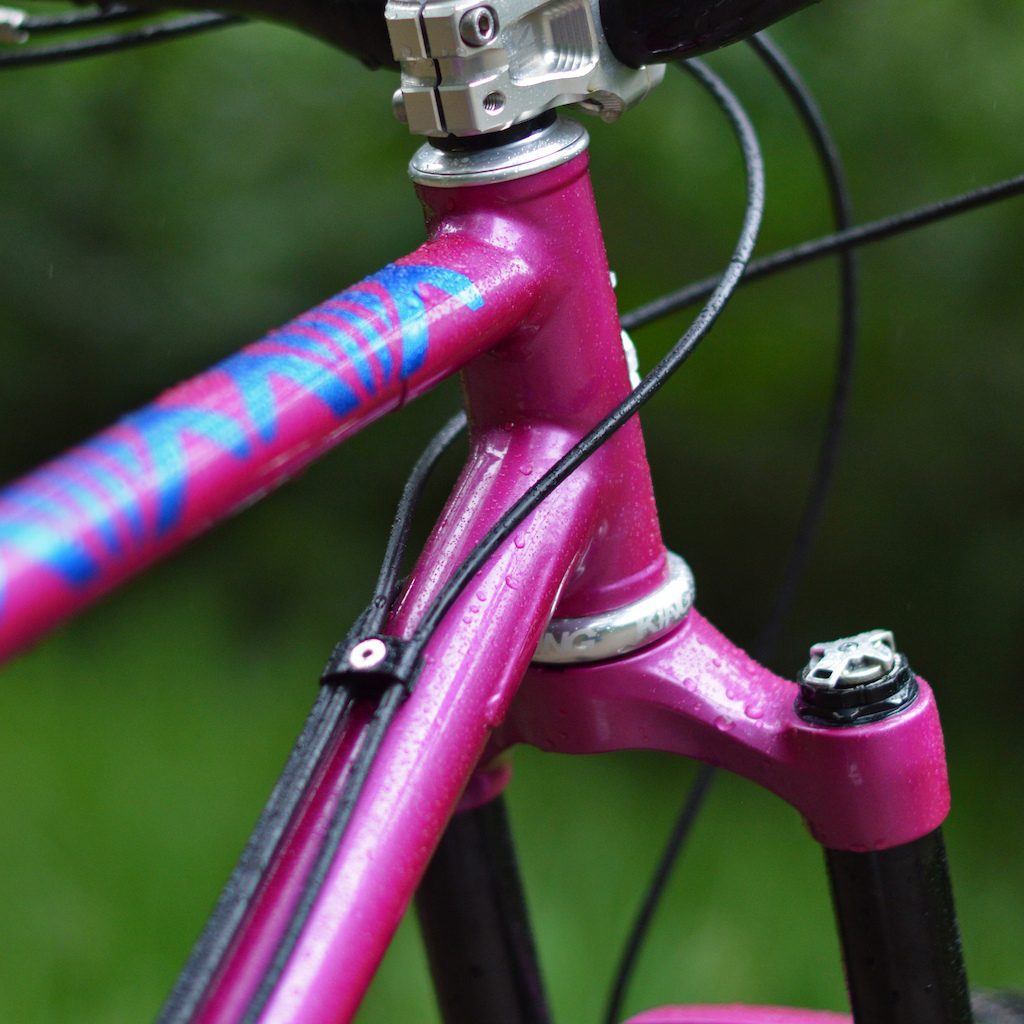 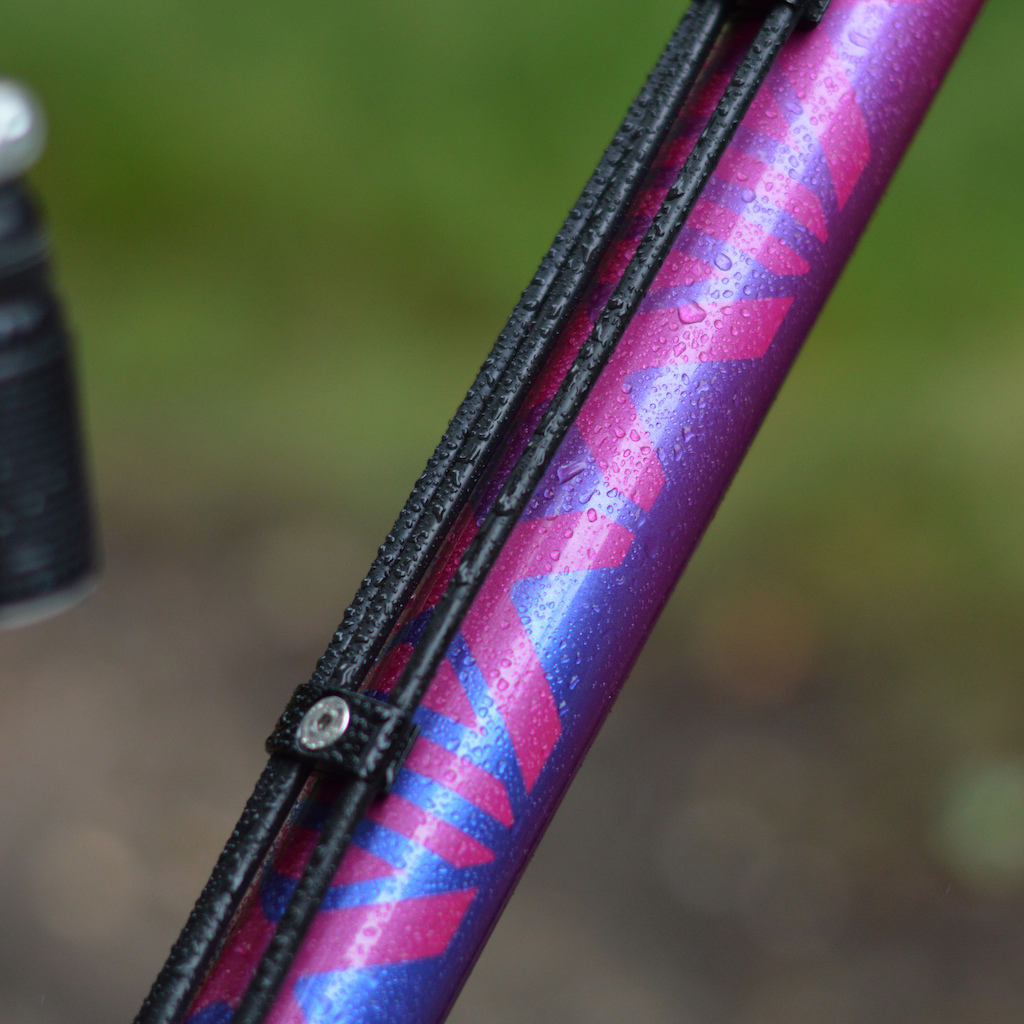 The pink to blue fade is done by Cyclepaint.nl 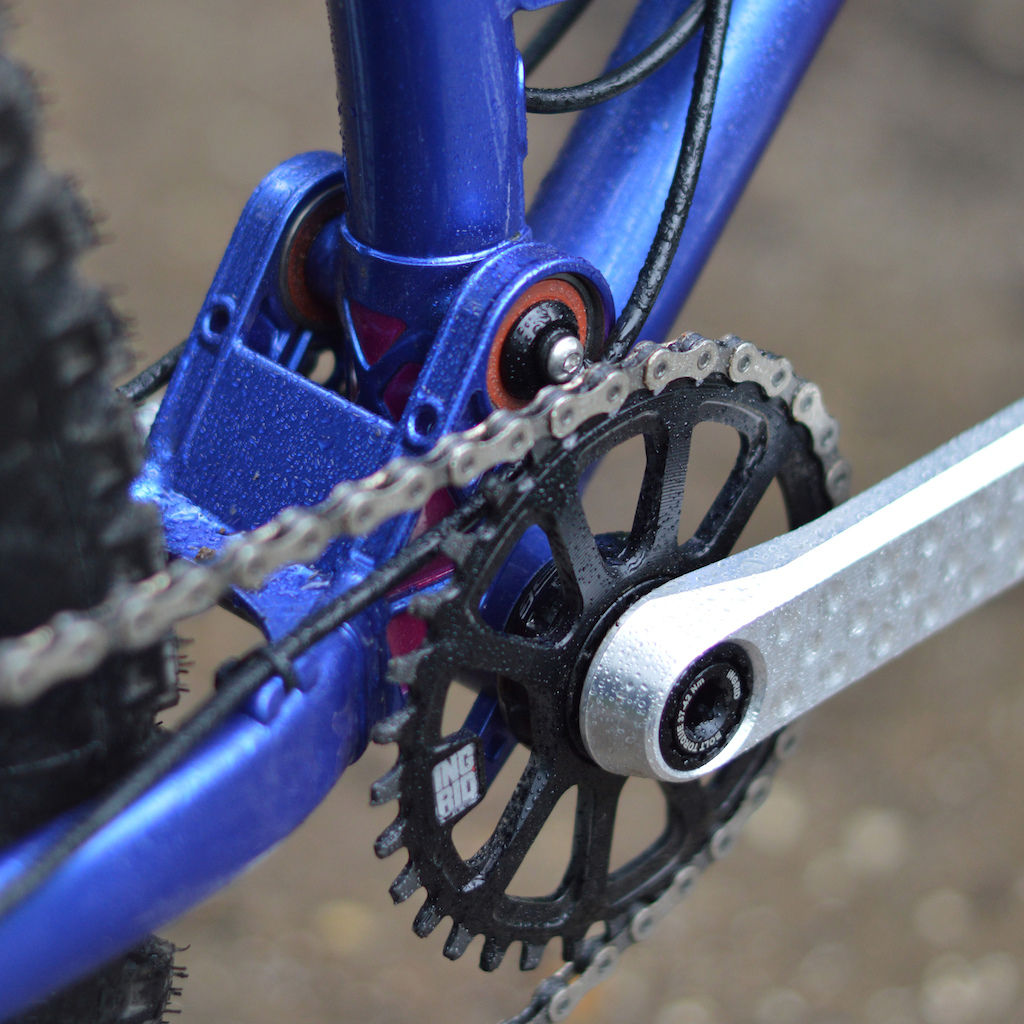 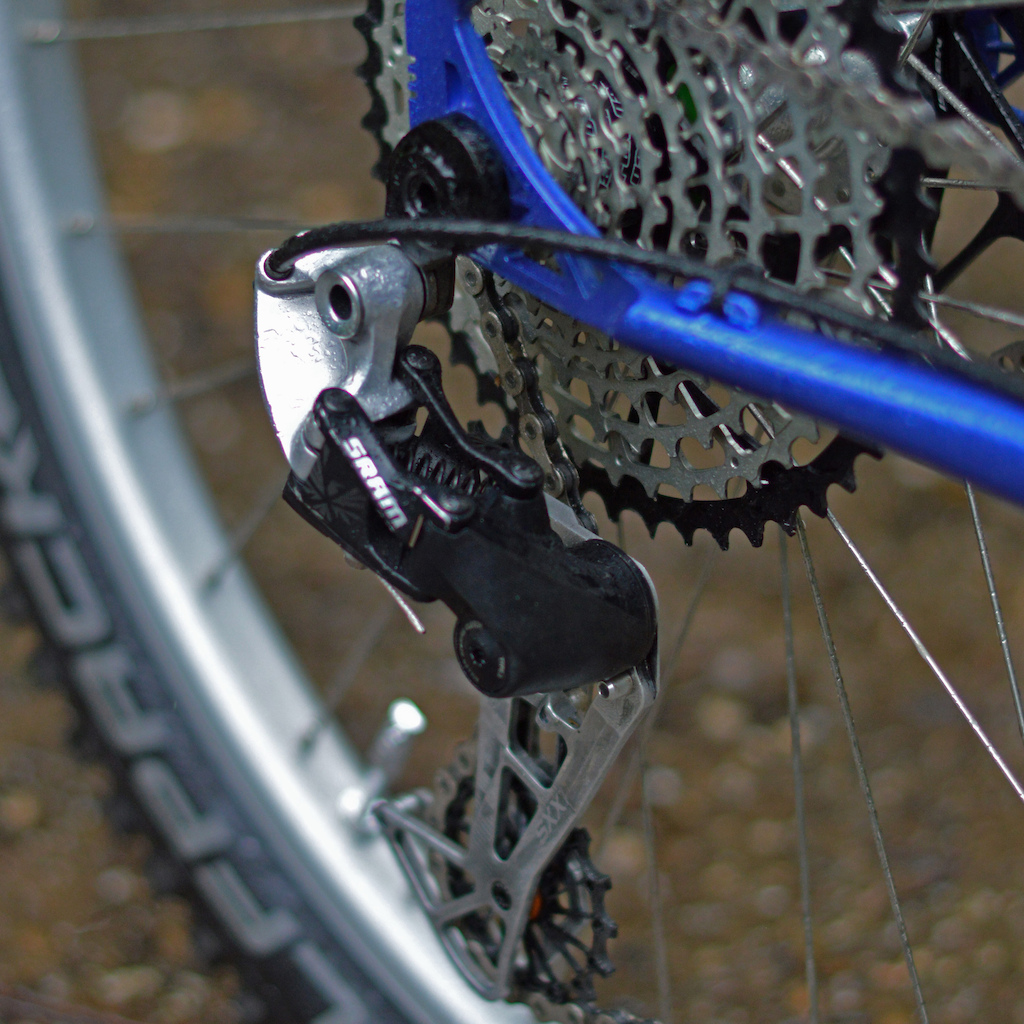 A mix and match of Ingrid, SRAM and Garbaruk parts make up the drivetrain. 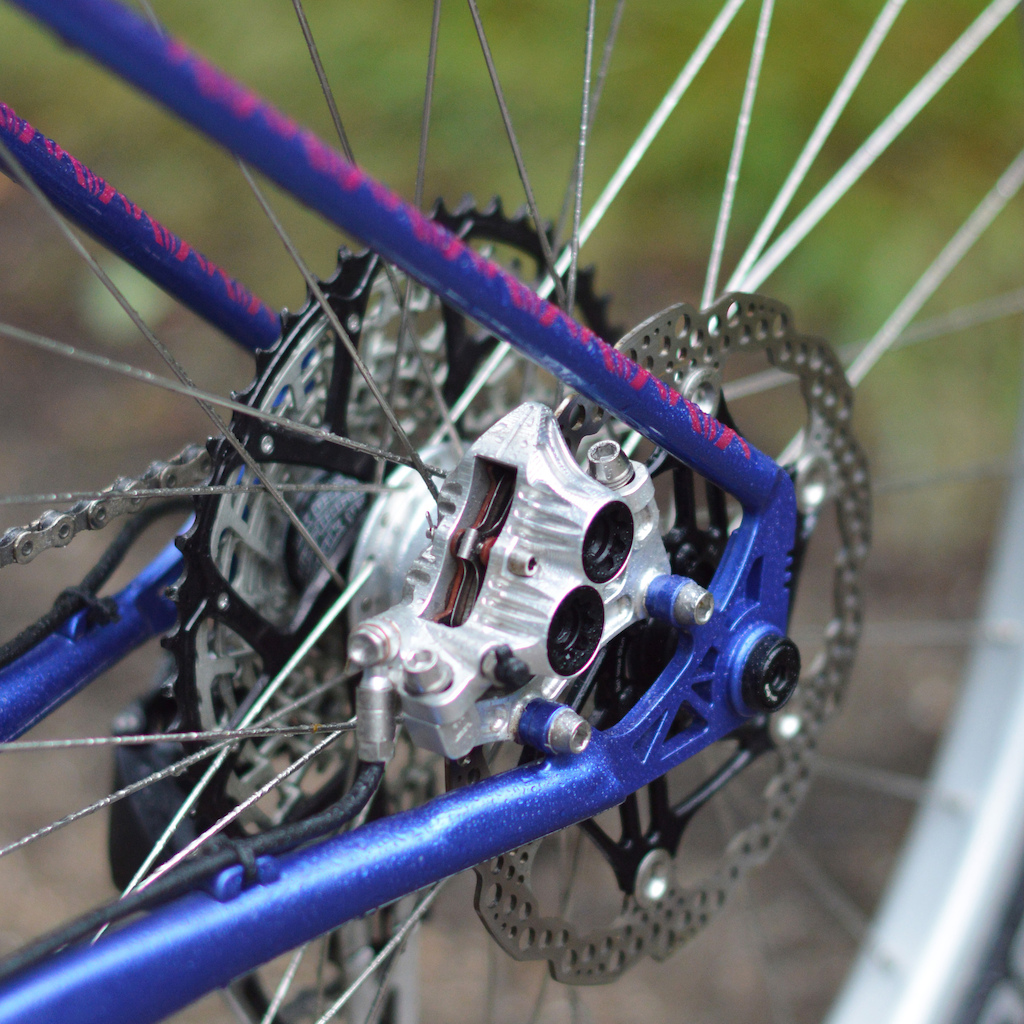 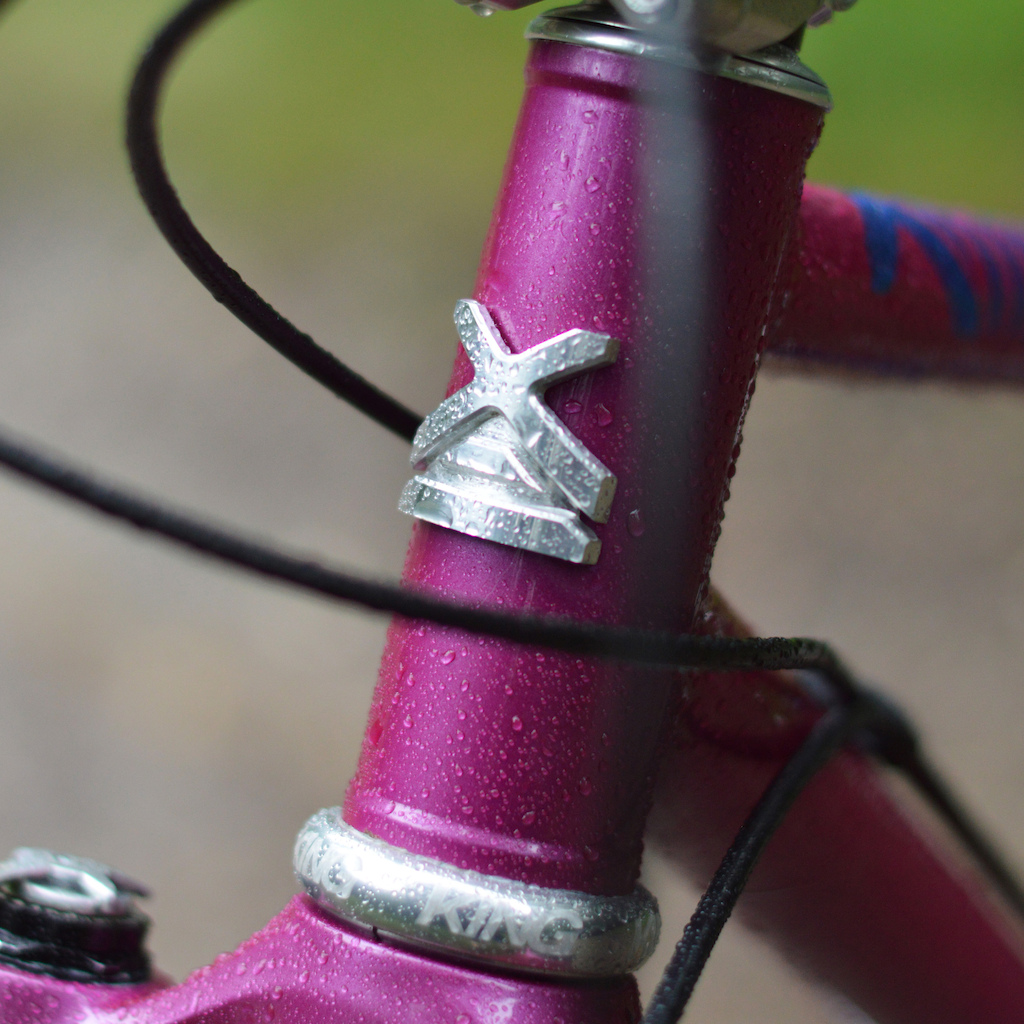 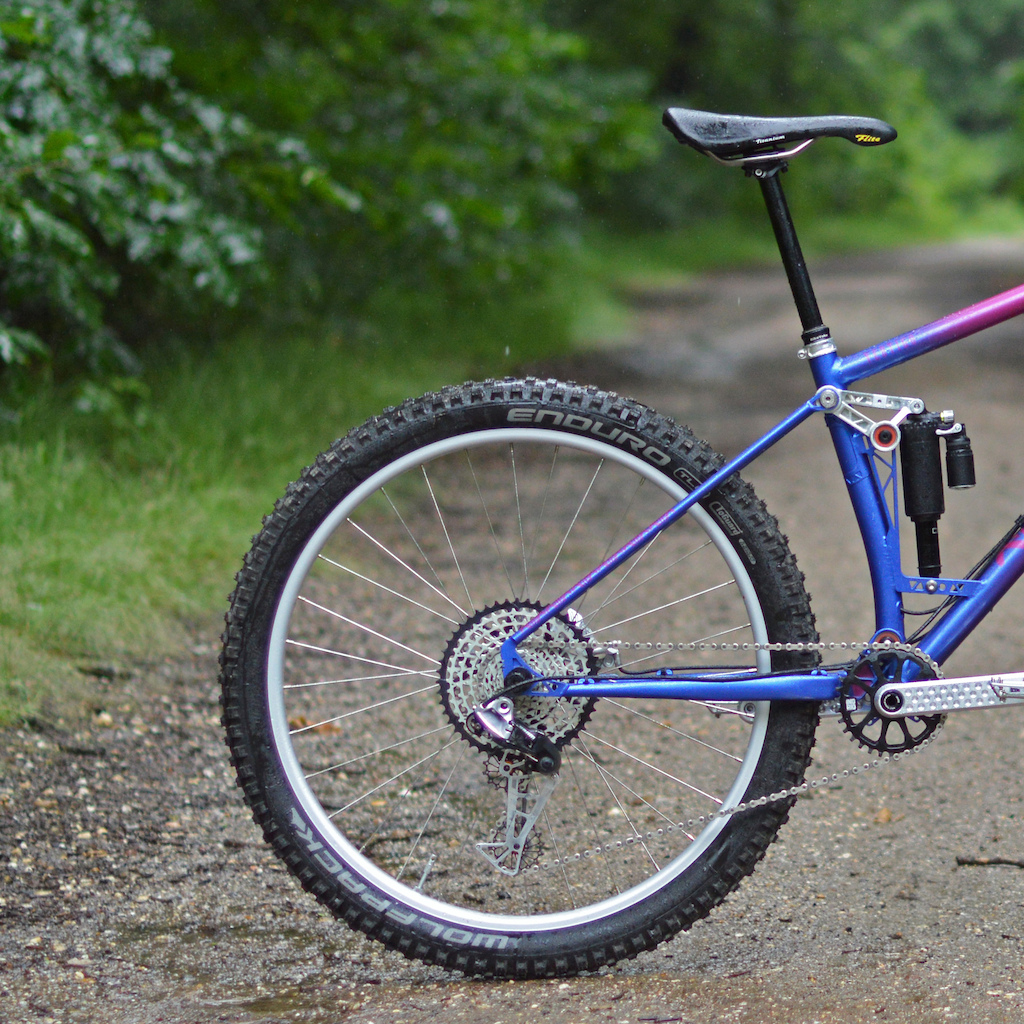 reindeln (Jul 26, 2021 at 9:48)
Outside market research showed that everyone on Pinkbike already knows exactly what a 90's Nike Air Max looks like, and would actually be offended if they included a photo for comparison.

ReformedRoadie (Jul 24, 2021 at 18:18)
@hllclmbr: true
Titanium frames are also technically alloys with 3/2.5 or 6/4 percent chromium and vanadium (or is it the other way around…been awhile).
Either way no one but a troll or a jackass goes around referring to their steel or ti frame as “alloy”.

Back the day, if you had a 6/4 Ti Litespeed, you’d most certainly claim it was a 6/4 alloy bike, but you might also be a jackass.

dump (Jul 23, 2021 at 14:09)
Having had AirMax back in the day, nothing about this says that to me. Doesn’t need that association to be cool - it stands alone, purple/blue fade and all. Reminds me of what a bunch of bike companies were doing in the early 90s.

m1dg3t (Jul 24, 2021 at 2:13)
WTF does this have to do with a pair of shoes older than most posters on this forum? The paint job is slick, but seriously. Nike is a douche company anyways. They charge $200+ for a pair of shoes made in a sweat shop somewhere for pennies on the dollar.

waltworks (Jul 23, 2021 at 18:44)
@RayDolor: Thin actually probably helps here (stay can flex a bit more). But it won't matter in the end, fatigue will win as the chain/seatstay angle opens up every time you hit a bump.

flaflow (Jul 23, 2021 at 19:07)
@waltworks: This beauty prolly wont be ridden enough to destroy it. As I enjoyed the photo I was left wondering why my rear triangle is so beefy looking.

Boozzz (Jul 24, 2021 at 9:10)
Cracked one of the dropouts of the hardtail version in less than 300 km. Frame flexed like mad. With a shock attached to it and everything moving, and the same skinny stays, mad flex might be a bit of an understatement. Fashion above function!

Boozzz (Jul 24, 2021 at 14:00)
@jamisdiablo: Right dude, calling me names because I point out a big issue I had with this design, how courteous and grown up. Hope you enjoy your bike more than I did.

markkarlstrand (Jul 23, 2021 at 21:34)
To each his/her own I guess. I love the flex of my steel bikes and I love my FS bikes. I just don't get steel FS frames at all however. I don't want my FS frame to flex in the slightest. And the aesthetics are just not there for me either, unless we are talking an old BMW.

sewer-rat (Jul 24, 2021 at 0:51)
My Cotic doesn’t noticeably flex at all, it does however provide a less harsh feel / feel more damped if that makes sense? Saying that it runs alu chain stays

phutphutend (Jul 24, 2021 at 1:44)
What about when you're going around corners? In this case, at 45° lean for example, only half the bump forces act through the suspension, the rest act to bend the frame sideways. A compliant frames gives so much more grip and control than a super stiff frame.

Unfortunately you've applied an over simplistic idealisation to your understanding of how a bike works...

Afterschoolsports (Jul 24, 2021 at 2:28)
Agreed. A beautiful bike, but full suspension steel doesn’t make sense to me. For my DJ, and gravel bike, hell yes. Steel is my preferred material for those, but not full suspension.

a-d-e (Jul 24, 2021 at 9:23)
@phutphutend: as have you. forces are predominantly directly through the bb to the tyre contact point. even with the greatest bike/body separation body position ( even pros dont display as much as the youtube 'howto' gurus suggest) your mass will be moving directly down through the frame/bb. maybe low speed then flex may help but who needs damping at low speed?

dnorris (Jul 23, 2021 at 15:09)
So many outstanding design solutions! And a really cohesive end result. It’s impressive how well you maintained the hardtail profile lines! Extra credit for your seat choice! Thanks for sharing

jgottya1 (Jul 23, 2021 at 21:37)
That is an awesome looking bike. The frame details from the builder are spot on! The collectors version is quite the looker. My kind of suspension, gorgeous cranks.. and that silver “anno” screams to me early bmx before colored anno. Very nice bike!

Peskycoots (Jul 23, 2021 at 13:33)
@BEERandSPOKES: yeah can I get a cool bike painted like a bland consumer object from roughly the same era please?

mattmatthew (Jul 23, 2021 at 14:03)
the fat stanchions on the shock and fork look weird paired with the skinny steel tubes. considering they spec'ed the ingrid cranks, i'd think that intend_bc's fork and shock bling would be right at home with this frame.

suravida (Jul 23, 2021 at 15:01)
Ingrid is quite a bit more affordable than Intend, and DVO is also very good. But the next Vertigo will be a full Intend affair.

ReformedRoadie (Jul 23, 2021 at 13:31)
He really missed an opportunity to go Next Level here:
m.youtube.com/watch?v=ZtmZLBGzeCs

trellis-opportunity-red (Jul 23, 2021 at 13:56)
That looks rad but I am really struggling to figure out which Nike trainer it is inspired by. Can anyone enlighten me with a pic/link?

nikoniko (Jul 23, 2021 at 17:14)
Yaaaaa buddy! True passion and craftsmanship!!!! Modern bikes are missing this aspect as everything has become disposable and non usable unlike bikes before 2010 where you could Frankenstein and make and create your own bike. Im sad for modern crap that only works on one bike.

mrpfp (Jul 24, 2021 at 7:04)
@ryan77777: For the crank arms I started with a wire wheel in a bench grinder to strip the black anodizing and then used an aluminum polishing kit from Harbor Freight to get the shine. Was quite a bit of work but I had a lot of time to kill! I polished my seat clamp (specific to Ibis frames so no aftermarket options) the thru axles, and a few of the other aluminum frame components. Those were much easier as they were already a smooth anodized finish, the cranks were a dense matte finish that was quite tough.

stumpymidget (Jul 24, 2021 at 9:04)
I am not a frame builder but i am a welder/fabricator. These pictures stopped me dead in my tracks, beautiful work.

garrisond5 (Jul 23, 2021 at 14:51)
@Doogster: I wouldn't recommend it. I built some of those up a year ago for a complete silver theme. They get dents just riding in the close proximity to rocks. Extremely soft!

I second this. My velocity blunts are made of butter ..

wyorider (Jul 23, 2021 at 20:28)
Triggered the dorks who polish parts and spend time on the internet instead of riding.

I’m sure the Mothers Mag has your stem so bright the glare in direct sunlight makes your bikes unridable.

Look at some of the bikes from Curtis for some amazing brazed FS bikes, though there are many other companies using brazed joints as well. www.curtisbikes.co.uk

tremeer023 (Jul 24, 2021 at 3:45)
@insertfunusername: I had one of their Supercross ht jump frames. They were so strong they came with a lifetime replacement guarantee.

insertfunusername (Jul 24, 2021 at 7:12)
@tremeer023: "Steel is real" is a saying for a reason. Fatigue life is very different between the 4 major players for frame materials.