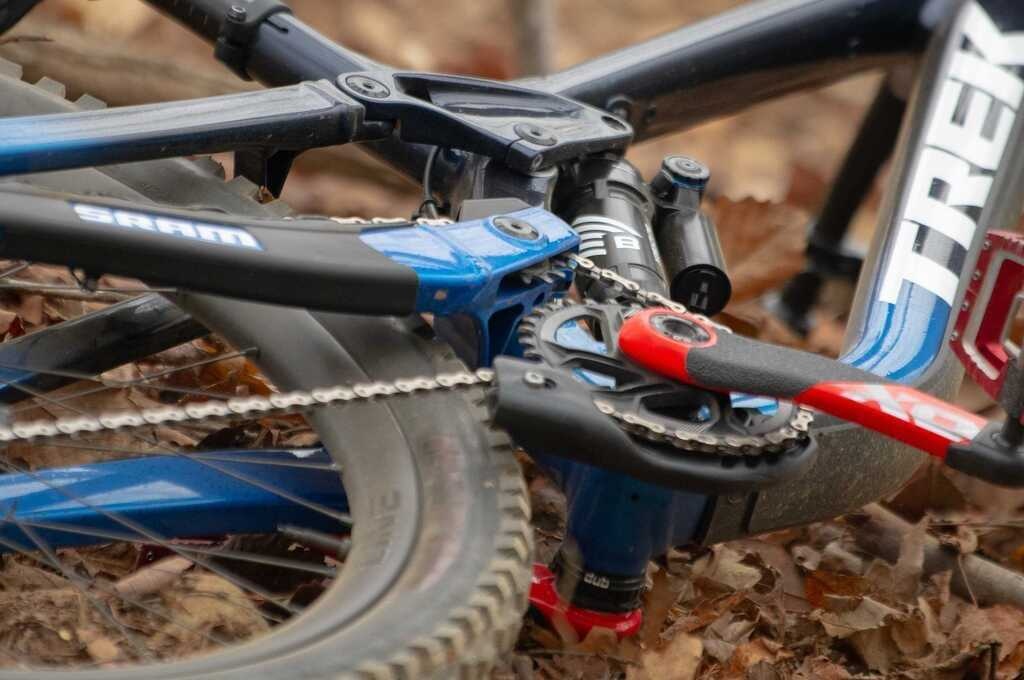 Speculation and rumors have been ramping up about Trek's new DH bike. First spotted a few days ago at Windrock Bike Park, we've received another photo of the bike that reveals a few more details.

The high pivot bike that we're seeing is most definitely an alloy frame, with welds clearly visible in places on both the front and rear triangles. While this may not be the final version, it sure looks polished.

Taking a closer look at the rocker pivot - there's a pinch bolt which is an interesting thing to see there. It likely just indicates the bearings are in the main frame rather than in the link, and the pivot axle is fixed by the bolt, but could it be something else? Additionally, there appears to be a mount under the top tube, possibly for telemetry, as there's not a ton of reason for a water bottle in that location on a DH race bike. In the original photo (below) it looks like both brake and shift routing go down the back of the seat-tube, so maybe that mounting hole is related to that. 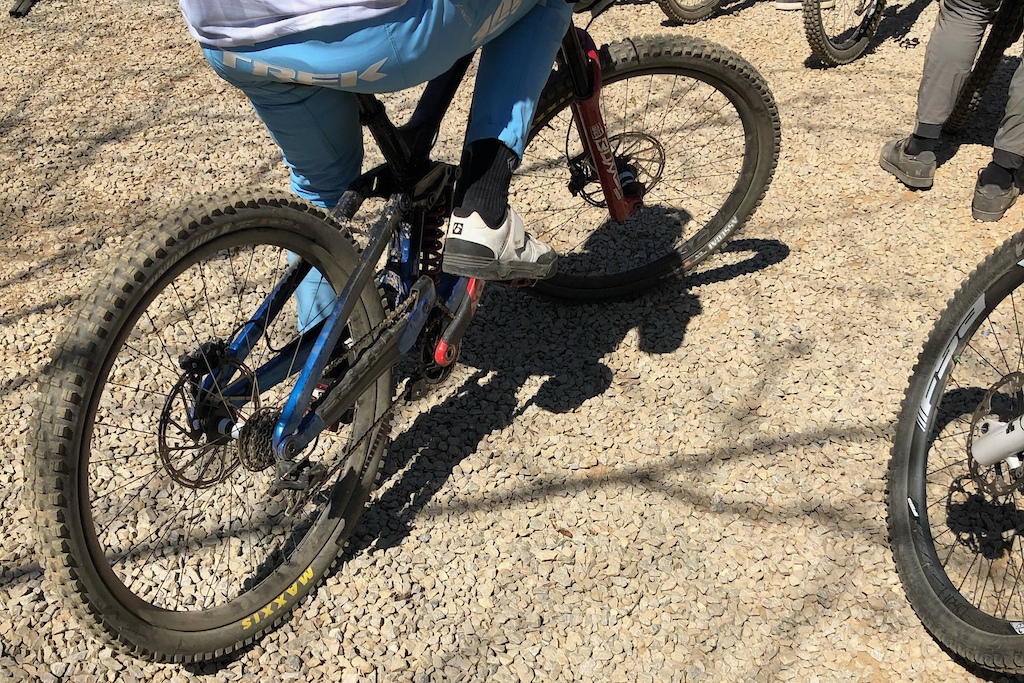 In this photo, we can see the bike ridden with a coil shock and what appears to be a cable close to where the holes in the top tube are.
On to the shock. There are a few things to note here. The BlackBox labeled shock is certainly a prototype as SRAM/RockShox use the Blackbox label on parts that are still in development but not quite yet available to the public. Potentially an evolution of the SuperDeluxe, the shock has a slightly different aesthetic. Most notably, the compression dial seems to be on the side now instead of the top.

We've reached out to RockShox for more information on the shock and will provide an update when we hear anything.

Any idea of pricing?

JamesE420 (Mar 11, 2021 at 21:59)
@bikehard11: it was the subject of last weeks podcast, NSMB wrote an article criticising pinkbike for breaking imbargos by publishing spy shots.

Arierep (Mar 11, 2021 at 23:46)
@JamesE420: I really really like NSMB reviews and such, but they disappoint me each time they go into the poetic or social justice rant rabbit hole

hitarpotar (Mar 12, 2021 at 1:07) (Below Threshold)
Why talk about the GX AXS under this article? Is there a GX DH AXS expected, connected to the rumor of the HP Session?

huckle-to-buckle (Mar 12, 2021 at 1:15)
@hitarpotar: I just mentioned it because the leaked image of it is floating around at the moment. Also I don't think there going to release a DH AXS from what I've heard, However I'm pretty sure you can swap the cages on an AXS mech to get a DH version.

kcy4130 (Mar 12, 2021 at 4:33) (Below Threshold)
@DoctorWatson: Honestly, I don't get the excitement over axs. A wireless gx would have to cost less than a cabled gx before I would even consider it. I mean, if I accidentally go one ride too many without lubing my chain, my chain still functions. Sure it might make a bit more noise and wear faster, but it doesn't ruin a ride. A dead battery would pretty much ruin a ride.

HB208 (Mar 12, 2021 at 8:15)
@timotheysski: Someone above mentioned it was 620 euro, but US and European pricing can differ a lot. We shall see. I am sure it will be more affordable regardless. Ultegra wireless is relatively affordable now on the roadbike side (I know that is Shimano) and that was pushed down from higher end groupsets.

ols532704 (Mar 12, 2021 at 9:04)
@huckle-to-buckle: I am not an expert on the axs setup but dont know if putting a shorter cage would work because spacing on the cogs is still different, Unless you use Srams 12 speed road cassette.

A-HIGHLY-EDUCATED-PROFESSIONAL (Mar 11, 2021 at 16:13)
I'm sure it would be really hard to get a good picture of a bike just lying on the ground in the dry leaves.

jaame (Mar 12, 2021 at 10:52)
@A-HIGHLY-EDUCATED-PROFESSIONAL: if the person who took this walked literally three steps to the side it would have been like, 680% better

Dustfarter (Mar 11, 2021 at 16:18)
I happen to think a bottle on a DH bike makes sense. If you're doing park laps you still have to hydrate and sticking a water bottle down your pants is stupid. Let's be honest when you're stoked to do a bunch of laps or the lines are long you don't stop all that often to drink water.

SupraKZ (Mar 11, 2021 at 23:38) (Below Threshold)
Drill your frame if you want to. I don't want ugly bottle mount holes on mine. Drink water at the bottom or in the shuttle. How are you even going to drink mid run?

Richridesmtb (Mar 11, 2021 at 15:13)
That idler and chainguide arrangement looks so neat. All tucked away nicely (probably a pain to keep clean though).

megatryn (Mar 13, 2021 at 12:44)
@brianpark: I'd love a bottle mount on my DH bike. Just to bring a bottle up to the top and stash it there for long days in the park without having to ride with a pack.

cwatt (Mar 11, 2021 at 15:25)
What is the benefit of that lower pulley attached to the bash-guard? I thought those weren’t necessary with clutch-based derailleurs?

Edit — Perhaps it’s necessary because the chain line up to the top pulley means very little chain is in contact with the chainring and more prone to falling-off?

brianpark Mod Plus (Mar 11, 2021 at 15:28)
Yep you nailed it with your edit. High pivot bikes have a lot less chain wrap on the chainring, so they sometimes use lower pulleys. This one looks pretty slick.

zacjob (Mar 11, 2021 at 17:28)
@brianpark: There's also the much less talked about lower chain growth. The deraileur cage can only take up so much slack.

Can you call it a spy shot when she's got her skirt hiked up and slowly bends over to pick up a pencil???

ArturoBandini (Mar 12, 2021 at 0:17)
Having read that a couple of times now: I think telemetry is absolutely not the right term to use here. But you can not go wrong with „data acquisition“ for example.

mixmastamikal (Mar 11, 2021 at 15:46)
They are going to release a new DH shock in a 250x75mm but it will be a trunnion shock just to frustrate everyone wanting to change to something else.

vandenr2 (Mar 12, 2021 at 14:30)
@alexisalwaysonfire: the video was filmed last year around august/September/October. Were the Zebs released by then?

IMeasureStuff (Mar 11, 2021 at 17:17)
Compression dial on the side of the shock instead of the top it a Huge benefit if you want to mount the shock upside down (like on a Norco Optic) as the dial is still easily accessible.

stunnanumma1 (Mar 11, 2021 at 17:53)
Telemetry is the in situ collection of measurements or other data at remote points and their automatic transmission to receiving equipment (telecommunication) for monitoring. The word is derived from the Greek roots tele, "remote", and metron, "measure".

nickmalysh (Mar 11, 2021 at 21:04)
Even prototype trek looks better then half of another bike manufacturers

Your old Session is now outdated and no good. I have one Biden Stimulus check in my pocket and will graciously take it off of your hands for the more than generous price of $1600.00 USD.

tacklingdummy (Mar 11, 2021 at 15:41)
Companies copying other companies. It is starting to get incestual. Lol.

Jesse221 (Mar 11, 2021 at 16:37)
Dial looks bigger and knurled like a HSC adjuster on a charger. Wonder if we’re finally getting a non digressive valved super deluxe with HSC instead of a useless lockout.

tajtigabor (Mar 12, 2021 at 0:43)
It seems pretty damn close to the final production frame for me, cant wait for it to be released.

BikesBoatsNJeeps (Mar 12, 2021 at 4:30)
This has to be a Rock Shox Trek bike, not a TFR bike since the tire are Maxxis. Maybe the Vali Holl, Shandro team are going to be on development parts...

BamaBiscuits (Mar 11, 2021 at 15:41)
Wonder if they’re developing some version of the Reaktiv system to compensate on more pedal-intensive tracks?

pimpin-gimp (Mar 12, 2021 at 10:20)
@dave-f: and every time you click the switch it electrocutes your for being dumb enough to buy a singlespeed shifter?

steviestokes (Mar 12, 2021 at 13:22)
Pivot bearings in frame > Bearings in linkage plate. My Reign EATS them. Too much side to side force blows them.

Notmeatall (Mar 12, 2021 at 12:35)
I really hope some troll painted his GT and put some sticker on the shock. It would be freaking awesome!

The old return as new!

CircusMaximus (Mar 11, 2021 at 15:43)
@mikekazimer: judging by response speed, I’d bet you were just waiting for that very comment!

erikvehmeyer (Mar 12, 2021 at 9:05)
@L0rdTom: One less keystroke. This man is an efficiency machine!
Below threshold threads are hidden

It could be more versatile, an Enduro that can run a DC fork.

The frame looks very finished, as do the parts like to lower chain guard.

justinfoil (Mar 11, 2021 at 15:24)
Remember when you guys asked if it was ethical to post spy shots? How about whether it's worth it? One bad pic followed by a load of blind speculation... Ethical? Debatable. Gets clicks? Probably. Useful? Not at all?