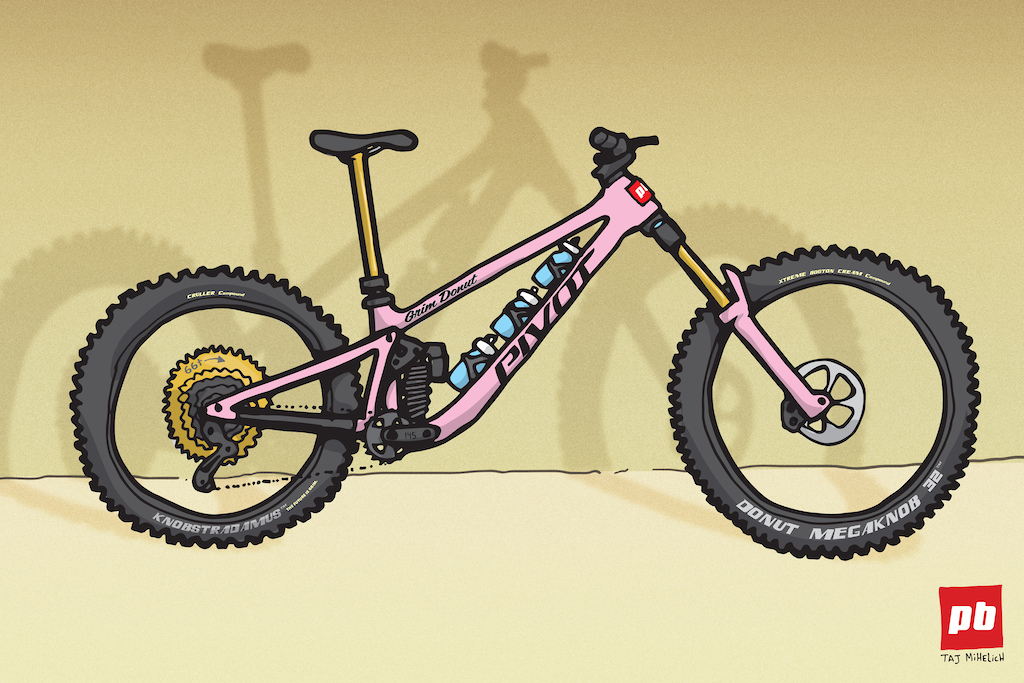 Pivot Cycles and Pinkbike announce 2021 partnership.
The award winning manufacturer has committed to producing and racing the Grim Donut.

Last year, the mountain bike world was turned on its head when Pinkbike produced a “bike from the future” called the Grim Donut [Part 1 & Part 2]. A tongue-in-cheek lampooning of the industry’s incremental advancements, the Grim Donut used geometry from the past 10 years of bike development to extrapolate what the future could look like.

A joke taken too far, everyone was surprised that the bike was actually rideable, let alone fast. But after being piloted by Yoann Barelli to some very fast test laps, it turns out that there might be something to that assumption of linear progress.

We're excited to announce that Pivot will be producing V2 of the Grim Donut. Details on the bike are still scarce, but we can release the following information:

• For the first time in the history of the bicycle industry, a new bike will be steeper than the one that preceded it. We're calling it Steeper Head Angle Technology™. The first Donut was supposed to have a 57° headtube angle, but because Pinkbike is bad at math it ended up just shy of 56°. After some testing with anglesets, the new bike is set to have a 58° headtube angle. So conservative.

• It will be handcrafted with a premium blend of culinary grade, ultra-exclusive Al13™ alloy, with tube shapes perfectly optimized for aero tucks. Using advanced manufacturing processes ensures delivery of an imperceptible 0.69% increase in stiffness-to-weight and ride quality.

• The bike is no longer limited by needing to weld two toptubes together. That means that, for the first time ever, the Grim Donut will be produced as a size Medium (525mm reach).

• Designed around pre-de-tensioned wheels so you can finally turn left just as well as right. Vertically rigid yet laterally compliant.

• We don’t know what suspension design we’re going to use yet, but rest assured it will keep all pedaling forces, brake forces, rough terrain impacts, gear ratios, and your parents entirely separate from each other. There will be no compromises.

Tom Bradshaw putting in some test laps on the original Donut. Are reverse offset forks the future?


Pivot has also committed to bringing the Grim Donut V2’s leapfrog approach to the race circuit, using their EWS race team to test and validate the bike’s blistering speed. Ed Masters, Matt Walker, Bernard Kerr, Morgane Charre, and Emilie Siegenthaler will all take the start-line on the new bike throughout the year. 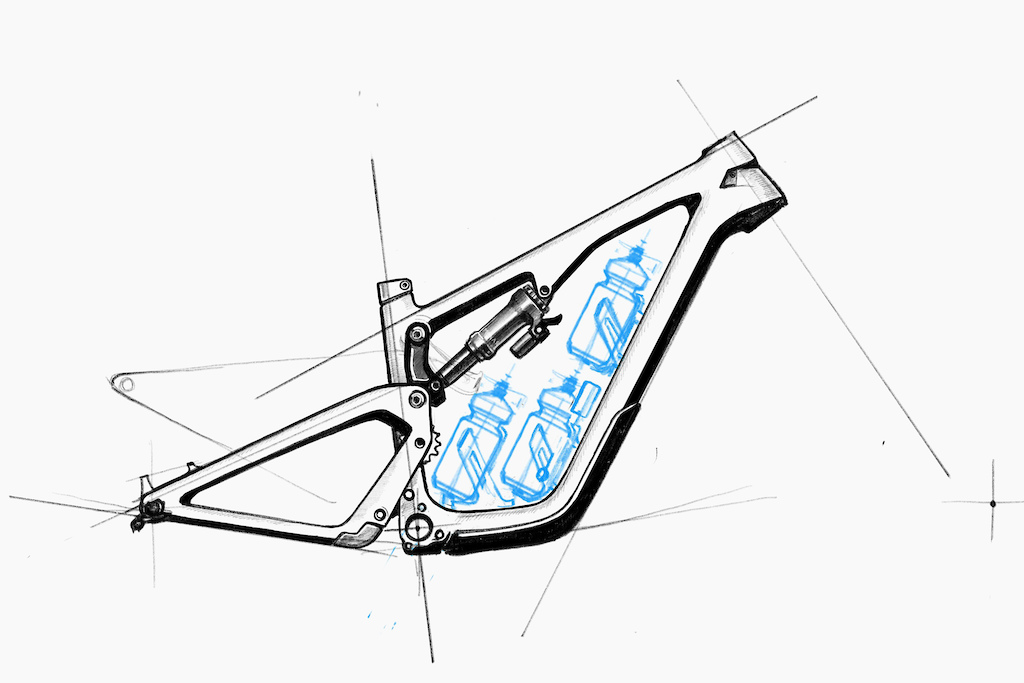 The original High Pivot Virtual™ suspension design had all the things: dual-links, an idler pulley, and a pivot higher than Snoop in the mid-90s. Plus room for three bottles, a feature that's being revisited in V2. Drawing by Waki Designs.


There will be a very limited number of production Grim Donut bikes made available for the public to purchase. Stay tuned for more information on that launch later in 2021. 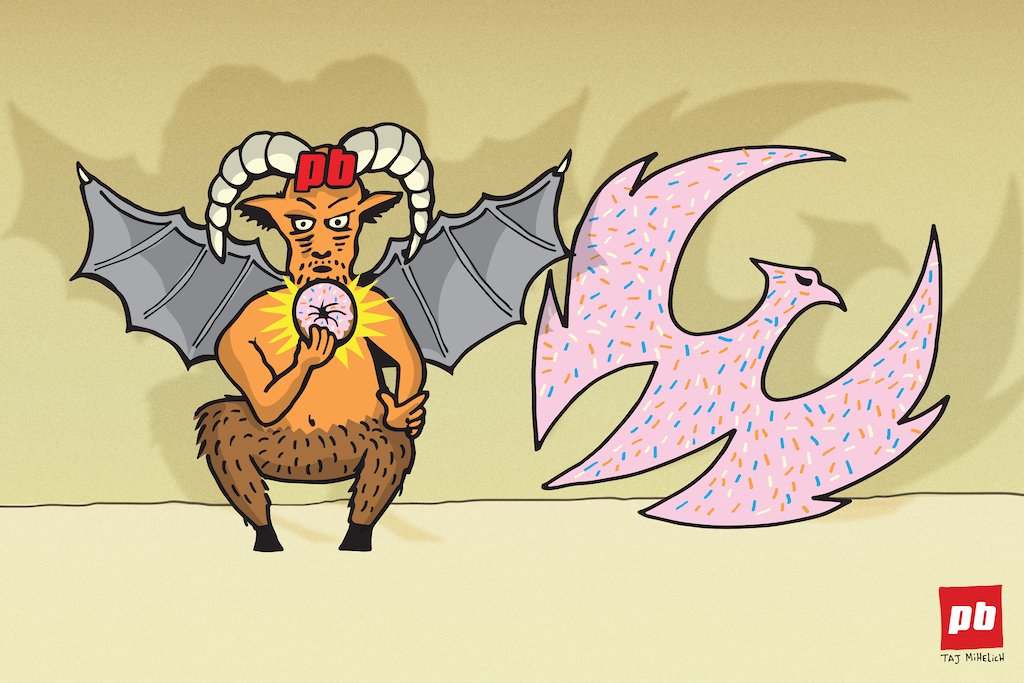 The outlook for the competition is grim.

dcaf (Apr 1, 2021 at 5:20)
This is obviously April Fools.....If Pivot was really making this bike they would roll out their new wheel spacing standard, "super duper boost" but be unable to ship the bikes because nobody makes wheel spacing that wide....yet!

tacklingdummy (Apr 1, 2021 at 7:49)
No joke, people would likely buy it. It would be interesting to see how many units they would sell.

southoftheborder (Apr 1, 2021 at 13:25)
@brianpark: seeing Pivot's geometry, I think the joke it's worth twice the points. They are certainly a couple seasons behind.

Makes the Pinkbike comment section a little bit less boring so this better not be a April Fools Joke or I’ll never downvote you again!

@tacklingdummy - I created a fake account only once. It was a social experiment. I was spewing completely untrue stuff but I was attacking my main account saying Waki is a fraud. I got many upvotes. Sorry I had another one Wcartman or something. Again... I was purposefully talking bollocks... many upvotes

shr3d (Apr 1, 2021 at 0:08)
Next up: Breaking News: Container full of bikes with a wheelbase of a couple of hundret meters seemed to be the reason why the ever given go stuck in the suez canal. The excessive amount of waterbottles led to an unequal weight distribution of the entire ship

kopaczus (Apr 1, 2021 at 4:52)
@winko: not that I miss him, just wondering what happened to his obsessive-compulsive need to post all that crap on pinkbike. maybe he finally talked to his psychologist about it?

EnduroManiac (Apr 1, 2021 at 5:54)
@kopaczus: I guess he’s been banned from the internet for bringing the global bandwidth down for the rest of the world.

Long bikes are here only because they got lobbied by unusually tall people like Paul Aston who worked for Geometron, Chris Porter or Jens Staudt who worked with Pivot on geometries. We all pay price for tall people pushing their agenda. Big cassettes are just wrong, carbon bars suck for arm pump, what you need is an Eleiko bar, 100+kg of weights and romanian deadlifts.

justwaki (Apr 1, 2021 at 7:38)
@kopaczus: Nah, self medicating. I have been banned by DCaddict and Mattlamb something something. I have seen over the months how much they missed me and they spread their message of love and tolerance. i cracked man I cracked...

armorall1 (Apr 1, 2021 at 2:12)
Meanwhile Yoann and Guerilla Gravity are secretly working on their Smiling Baguette race bike with built in bluetooth surround sound that plays "The wheels on the bus go round and round all the way down"!!

yarbianthebarbarian (Apr 1, 2021 at 6:31)
This was clearly a typo. Should be "Four Letter Advanced Acronyms."

SvenPixa (Apr 1, 2021 at 3:39)
I'm calling it: the joke about this is, that it actually isn't one. Hear me out: Pivot did already built the "Frankentrail", an experimental 120 mm trailbike prototype with 62.5° head angle, for Jens Staudt from mtb-news.de back in 2016. And Chris Cocalis even built an extra frame in his size to test it himself. I might be completely out to lunch, but it would kinda make sense, wouldn't it?

justwaki (Apr 1, 2021 at 12:16)
Jens is to Pivot what Paul Aston is to Nicolai as far as I am concerned. I installed 1.5deg angle set in my bike, now it has 63.5” head angle. I don’t notice any difference in how it handles steepest and most technically demanding local trails. I am all sold on yuge bikes. I was wrong all these years. Like Jens, I want 32” bikes even though I am much shorter than he is. I think what we need now is more usd forks with glide bushings and more Trust style forks since they handle slack head angles better. Preferably DC USD forks. We can then comfortably dip into sub 60degree head angle area.

Predictions:
Not a Pivot, but Pivot helps with the design and maybe manufacturing.
Announced by the end of summer.
Addition of extremely adjustable geometry.

TrekXCFactoryRacing (Apr 1, 2021 at 8:05)
Mine shipped with a big crack in the top tube, but it still sends fine. I've only broken five ribs on it so far. I can't imagine how few bones I break once the new frame arrives!

hatchleader (Apr 1, 2021 at 2:11)
I was so excited until I scrolled down to the comments and realised my foolishness!! Well played PB and Pivot... well played!! Oh- and Fuck you for getting our hopes up!!!

winko (Apr 1, 2021 at 1:00)
@brianpark: Thats unacceptable, bike so far ahead of its time needs so much better hub spacing compared to this barely rideable stuff we have to deal with nowadays...

kriesel (Apr 1, 2021 at 3:04)
How can you go for the outdated Four Letter Acronyms?
The world already moved on to Extended Three Letter Acronyms (ETLA™)

kevinkeenan (Apr 1, 2021 at 4:06)
This joke doesn’t work. If it’s designed by Pivot, that means it will have some version of DW-Link. And Weagle is a genius and will end making this thing actually work! Joke over.

MaRayburn (Apr 1, 2021 at 9:25)
Exactly what I needed today, a happy distraction while it is snowing. I think that the Grim Doughnut is the best name ever and if pinkbike could convince anyone to actually use that name on a bike I would so buy it.

HellmanD (Apr 1, 2021 at 0:18)
The donut in the bottom illustration looks more like something you'd see after a cat walks past you

davemud (Apr 1, 2021 at 13:41)
When I worked at Syncros Pipin made Peter a cane out of Syncros parts to ridicule him. Peter took his cane to Interbike and sold about 100 of them getting the last laugh. People would buy this bike for the halibut.

brianpark Mod (Apr 1, 2021 at 15:22)
Ah that's a great story. I heard Pippin passed away recently. I didn't really know him but he's had a huge, under recognized impact on the sport.

blackforest (Apr 1, 2021 at 0:05)
It is already produced: www.mtb-news.de/news/forschungsprojekt-mountainbike-geometrie-prototyp

grapehi-chewfan (Apr 1, 2021 at 0:06)
It’s quiet around these parts at this hour. Steeper head tube angle , aka S.H.A.T should be adopted industry wide IMO.

imbiker (Apr 1, 2021 at 0:36)
With all those water bottles, roadies posing as mountain bikers is the first thing that comes to mind...Fool

chrisrasco (Apr 1, 2021 at 6:30)
I want to be a Professional Teenager!!!! Where does one get a degree and/or a internship? I'm assuming this is a different job than unpaid intern...

digitalsoul (Apr 1, 2021 at 8:07)
The real joke is that pinkbike can put out around four articles in two years and people are still going crazy over this bike.

RichieWa (Apr 2, 2021 at 13:54)
TLA should now be replaced with FL(NOE)A. (Four Letter (Now One Extra) Acronym). It's the future, and sits nicely with the pinkbike maths approach.

waldo-uribe (Apr 1, 2021 at 5:22)
I think that pivot should really throw some bucks to make it happen. Perfect for marketing and to keep us entertained.

mountainbycker (Apr 1, 2021 at 6:56)
Looks like they partnered with Harley Davidson on the geometry. They should rake out the front end further.

FauxreaL (Apr 1, 2021 at 7:10)
I was disappointed that you didn’t include a Tool Well Attenuation Technology box in the down tube...

boogneesh (Apr 1, 2021 at 7:28)
I just got an email from Guerilla Gravity. Yoaann stole your geo for his Gnarvana.

iduckett (Apr 1, 2021 at 6:23)
@delarscuevas: I get what you're saying, I felt the same. Without the exaggerated "release information", it might have actually been believable.

delarscuevas (Apr 1, 2021 at 6:55)
@iduckett: Indeed. I say Pinkbike and Pivot should make up for it to the PB community by actually building and selling it! :-)

TheR (Apr 1, 2021 at 7:31)
Sorry to break it to you, but no one is going to ride a “medium” with a 525 reach. This long, low and slack thing has gone way too far. And pre-tensioned spokes? You mean loose spokes? But yeah, all you sheep will go out and buy this bike, chanting “Looooooong! Loooooow! Slaaaaaaack! Like the bunch of sheep you are, who will do whatever the industry tells you to do.

TheR (Apr 1, 2021 at 13:01)
@codfather1234: Yeah, I’m surprised that someone who was so well-informed about the date fell for my little gag here. Gotcha! To you and all the people who gave me props — both negative and positive — April fools! Ya buncha chunderheads!

Don’t believe me? Check out my other posts on various April Fools articles about “the industry...”

NikolaiB (Apr 5, 2021 at 6:17)
Not if they actually produce a piece of shite like this....they’re not . This site is so in the pocket of the industry its disgusting...April fools or no ‍♂️